Charles Sheldon wrote "In His Steps" over one hundred years ago. In that book he coined the phrase "What would Jesus Do?" or WWJD as the fad was a few years ago.

He wanted the church to live with that question hanging at its heart door every moment of every day. The book was a best seller all over the world and still is a big seller.

But "In His Steps" is not Charles Sheldon's best book by a far piece in my opinion. I think I have read every book he wrote and I think he wrote several that were better.

Charles Sheldon pastored a church in Topeka, Kansas. On Sunday nights he would read his books to the congregation one chapter at a time. Afterward the book would be published.

Often newspapers would publish the latest chapter after it had been read in his pulpit. It is my understanding that some technically was overlooked in the weekly publishing of the chapters of "In His Steps."

This caused that particular book to become the domain of any publisher. So this great book was printed by dozens of publishers simultaneously around the world. I am sure it was a publishers dream come true to be able to print a book in great demand and not pay the writer anything. It was probably a nightmare to Mr. Sheldon.

20 years ago I searched long and hard for a couple of Sheldon's rare books. I have spent many hours scanning shelves in used book stores all over the US.

It was a great day when I finally found my very own copies of some of the hardest to find.

The advent of the Internet brought a whole lot of rare books to the market and eventually the prices came down too. A book that took me months to find can be found online in moments, ordered, shipped and received in two days.

And with shipping included the book is still cheaper than it used to be. I am glad for the convenience and the lower prices but it kind of took the fun out of it.

I was telling Bro. Caleb Bontrager about one of my favorite Sheldon books. While we were talking he pulled it up on his phone and found it for free on Kindle.

Wow! That is amazing. A book I searched months for was loaded on my phone in about 60 seconds.

I read it over the next few days and it was just as good as I remember. I heartily recommend it to everyone. 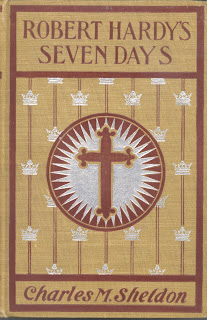 I certainly do not go as far as Christian socialism as Mr. Sheldon did but I know our Christian experience should radically change every area of our lives.

Download "Robert Hardy's Seven Days" from Kindle and let me know what you think.

Davy
Posted by Davy, Kelly and Odie Boggs at 6:10 AM

Email ThisBlogThis!Share to TwitterShare to FacebookShare to Pinterest
Labels: What I Am Reading