Travel Day and Shaving the Roof!

I had quite a bit to do Monday in order to be ready to leave. Plus it was forecast to be over 100 degrees and I do not like to travel in the day time when it is much over 90. The heat effects so many things including tires, engine temps and me! So we waited until Monday evening to leave Miami, Oklahoma.

I was hoping to drive to between Kansans City and Omaha and pull into a truck stop, rest area or Walmart and sleep a few hours. That would have been about 350 miles. The short night on Sunday and the hard day on Monday combined to make me give in at about 220 miles. We started looking for a place to stop. The previous rest areas were nearly empty so we did not think finding a resting place would be difficult.

So we kept rolling until we found a rest area some where near Missouri Valley, Iowa. I had driven 150 miles since I decided to stop. My back, shoulders and legs were cramping like crazy. In fact, I was so tired I knew I could not relax enough to go to sleep. Isn't that crazy? I laid down on the couch for a while until my muscles settled down and then slipped into bed a few hours. 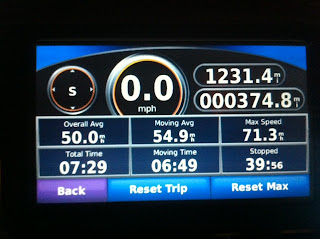 I was aiming for I-90 in South Dakota on Tuesday. It was supposed to be very hot there in the afternoon so we got up early and beat the heat to Salem, South Dakota. It was about 89 when we arrived but it did hit nearly 100 which must be pretty unusual to hear these folks talk.

We only drove 191 miles so it was not a bad day at all. We did not stop at all until we arrived at an RV park about 1 mile off the road. It is difficult to find a park that is big enough for me to pull the bus and trailer in but I had scoped this one out ahead of time. It came highly recommended as "Big Rig Friendly" but it was still very tight pulling into. Kelly Jo did a great job as usual. Pulling out looks a whole lot better. 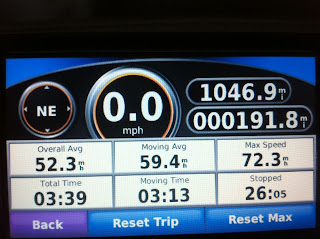 After the BoggsMobile was set up, I cleaned up and went to bed for the afternoon. They had some electrical problems in the RV park and that was a hassle but it was a good day. I am always thankful for a day of travel with no major difficulties. Praise God for His help.

It is a good thing that I took Kelly Jo to Lambert's Cafe on Sunday to celebrate her birthday because there is NOthing in Salem, South Dakota. I think she ate peanut butter and jelly on her birthday. Shame on me...

I promised yesterday that I would post pictures of a near miss on the blog today. When we left Miami on Monday evening we headed north on 69 Hwy toward Quapaw, Oklahoma and then up through Pittsburg, Kansas toward Kansas City. We have been up this road numerous times with our truck and fifth wheels and in the BoggsMobile.


The Hitchhiker fifth wheel was short. The Kountry Star fifth wheel was 13'1". The BoggsMobile is less than 12'6" so I never even thought about the railroad trestle on 69 Hwy that is posted at 13"8 until I had no where to go but under it or back up a LONG way on a busy two lane highway.


The trailer appears to be close to a foot taller than the bus. I do not know its exact height but I know it is dangerously close to 13'8"!!!


We stopped in the road and I put Kelly Jo in the drivers seat while I climbed to the top of the hill and talked her through on the phone. It was way too close for comfort but we did make it. We made by the skin of our teeth or the plastic fibers on that brand new AC cover!

Now you know why my muscles were so tense when I stopped about 7 hours later. Thank God we cleared it. 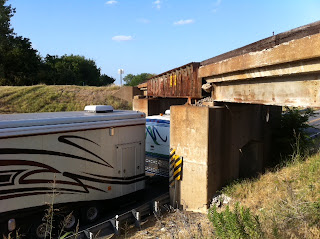 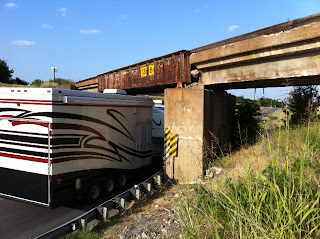 The funny part is that with all the traffic stopped behind me and the thought of ripping the roof off or having to back up against traffic I was pretty pumped up. With all that adrenaline I climbed right to the top of that hill with no problem. Once the bus and trailer were clear I started down and it was almost STRAIGHT down.

I thought for a moment that I was stuck like a cat up a tree. I could not stand the thought of the fire department coming to rescue me. I pity the guy that had to carry me down the ladder! lol  Obviously I made it down...

So tune in next time friends and neighbors for more adventures....

Davy
Posted by Davy, Kelly and Odie Boggs at 5:00 AM