Let us talk about a Big Blue Ox today.
We often receive questions about how we arrive for revival with both the bus And car. When they notice we have a car to drive, they sometimes assume Kelly Jo drives the car and I drive the bus.

I am so thankful that is not the case. I would not want to travel very many miles without KJo in the bus with me. We like being together and we have great contentment riding down the road and looking out the windshield together.

How do we get there with both the bus and the car and only one driver? Well, you see, the car pushes the bus everywhere we go.😊

Not really. The car is attached to the back of the bus by a tow bar and it rolls behind the bus with all four wheels on the ground. That is why it takes a specially equipped car for us and another of many reasons why we do not like to trade cars frequently.

When we first bought the BoggsMobile, we had no vehicle that could easily be pulled behind us. From late March to September 2008, we pulled nothing. The first month or so KJo followed behind me in our Chevy truck that we had driven for over four years. Once we got the truck in Ohio and up for sale, we had no car to drive during revivals. While we were traveling between revivals, we would try to get groceries and do laundry since we would usually have no way to go during the week.

That fall, Bro. Rickey Searcy sold us Mr. Cheap Jeep. Kelly Jo drove it to our first revival after that, but that week I ordered a baseplate and had it installed, along with the wiring for lights and we towed it away from that revival.

That is when I began my education about tow bars, base plates, towing lights and more.

I purchased our first tow bar used, very used. It was a solid tow bar, but it was old and had one major flaw. The tow bar had no way to fasten up off the ground once it was unhooked from the Jeep. I had to remove the pin, remove the tow bar from the bus and find a place to stow it all week. It was heavy and a big pain.

A few months later Bro. Brent Gabbard gave me a nearly new Blue Ox tow bar that he was not using. Blue Ox is one of a few major brands that make products like this in the USA.

I have used that tow bar for probably 12 years. After 4+ years we traveled by the Blue Ox factory in 2013 in Nebraska and had it rebuilt. It was so worn that they hesitated to rebuild it. They even replaced parts that they do not normally replace.

That was 7 ½ years ago and it has been in pretty pitiful shape again for a year or two. These are well built, but they take a lot of abuse in their normal service. With the miles we travel, I have definitely used this tow bar beyond its expected life span.

I started trying to order one months ago, but like everything is in this COVID world, it was hard to get one. I found one in stock that could arrive in Ohio by the end of December so I ordered it.

Not surprisingly there was a delay and we changed the shipping address for it to meet us in Tennessee at East Tennessee Luxury Coach the first week of January. It arrived and I installed it right away. 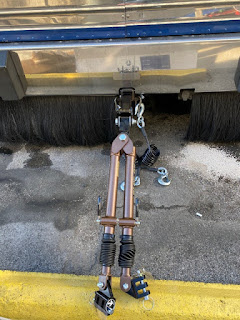 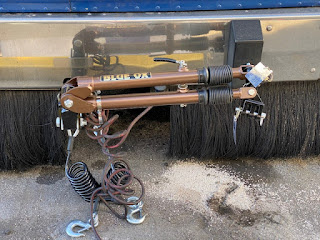 It came with new safety chains and a new electrical cord was added later in the week. 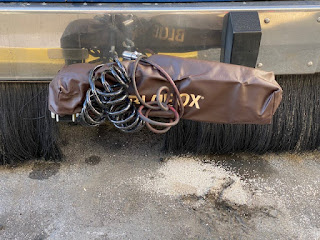 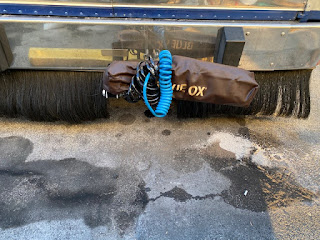 This new Blue Ox is a work of art. It really looks nice. It also has several improvements over the old model. The old one could get in a bind if the bus and car were not perfectly straight and nearly level ground. This one is mucho improved in that area.
Even though I keep the tow bar covered when we are parked, it is used lots of miles in all kinds of weather and will be caked with road grime before you know it.

I am thankful we were finally able to find one in stock at a great price and get it in. The website where I bought this now has it listed for $100 more than I paid, which is more in line with other places. I appreciate finding a good deal.

Maybe that answers some questions. Thank you for coming by to sit a spell with us today.

Posted by Davy, Kelly and Odie Boggs at 5:30 AM