Wow! What a toad strangler we had here this morning! In fact we had two nasty looking storm systems blow through Pender, Nebraska before 10:00. Didn't it rain, children, didn't it rain!

The water piled up on Odie's wheel chair cover. 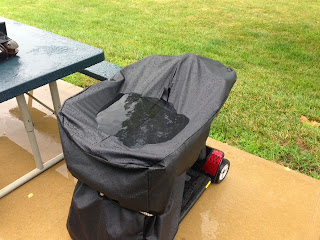 I was sitting outside early this morning waiting on the tech from Blue Ox to pick up my tow bar. I was reading and had not been paying attention to the sky. Well, the sky opened up and all the water fell out.

I grabbed my chair and threw it in the car and I rode out that squall in the front seat. It was a wicked storm with lots of huge thunder claps. I took the picture above after that front passed.

The sun came out, the sky cleared, the temperature went up and then it rained another bucket load all over again.

Wow! You talk about fickle weather! That reminds me of something Kelly Jo and I have laughed about for years.

We grew up in southern Ohio and heard people make some version of the following statement all our lives.

They would say, "The weather in Ohio is different than any where else. If you don't like the weather here just stick around 15 minutes and it will change."

We started traveling soon after we were married and found that folks say that every where. After we heard the same exact statement in about 5 different states it was all we could do to keep from busting out laughing.

After hearing the same thing in about 30 states from people that absolutely believe in only applies to their area we just chuckle and grin. The weather may be different but people are the same every where.

This picture is a sample of the pretty weather we have had all afternoon. 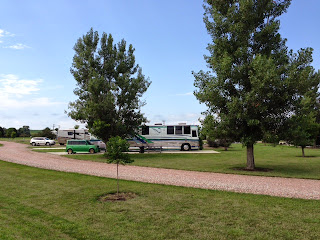 What, you don't like sunshine and blue skies? Well, hang around about 15 minutes. Here in Nebraska, it will probably change! Lol

We are staying in Pender another night. The tech was covered up today with tow bars to work on. On top of that, mine had some special problems they had to deal with.

Because of that they did not get finished and get me cashed out until about 3:00 PM. We would have been 4:00 leaving so we decided to leave tomorrow.

They really took care of my tow bar here at the Blue Ox factory. They believe in customer service enough to actually put it into practice.

I have always liked the Blue Ox towing system and now I have even more reason to like them. I have been a loyal customer but they have cemented that loyalty with great service.

That is a rarity in today's world.

Posted by Davy, Kelly and Odie Boggs at 6:02 PM