That Was An Exciting Day

Whew! That was an exciting day, in a weird sort of way.


We left Sevierville, TN area at 9:30ish yesterday morning and pulled into the barn at 11:20 last night.

After we were parked and hooked up, we walked up to Odie's house to say Hello and catch up on all that has been going on. She had a crock pot full of chili for us and it was exactly what we needed on a very cold night at the end of a very stressful day. It was the first thing we had eaten beyond snacks all day.

By the time we stumbled into the bus and moved things around so that we would have a place to lay down, writing the blog did not seem like such a good idea. Besides, I think I needed some time to process the events of the day.

We arrived in Vonore Monday morning and Jeff had everything ready to go. We had a nice visit, settled the bill and cranked up the BoggsMobile to hit the road. 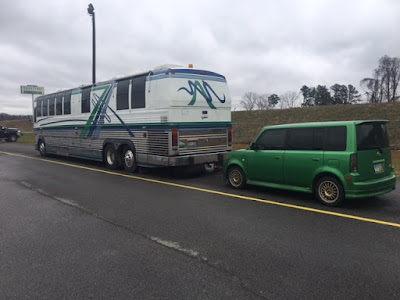 19 miles later on a busy stretch of four-lane, we smelled something burning and had to get off the road NOW.

I figured I had a brake dragging or seized, so while I was squeezing off the road, Kelly Jo was getting my infrared thermometer ready. The tag axle on the passenger side had a little smoke around it when we exited the bus so I shot the temperature on that one first.

Yep, that was it. I checked the temps on the other wheels to make sure and then called Jeff. Even though this had nothing to do with any work completed at Jeff's shop, I knew that he knew what I should do.

I was standing next to the tag axle on the grass between the bus and the ditch talking on the phone. Kelly Jo was standing in the doorway of the bus. And then COBLAMMY! It sounded like the motor fell out of the bus and onto the ground! Kelly Jo said later she thought a tire blew out.

She jumped out of the bus and said, "I think someone hit us." I relayed that information to Jeff and ran around the bus to the road side. I fully expected to see a car jammed up into one of the bays of the bus.

What I saw was one of our bay doors open a few inches. On each side of the bus, we have one bay that has a door on hinges that swings open. There were two big trucks going by and one of them clipped the hinged bay door on the driver's side.

I stopped traffic, closed the door and removed myself from the road. I did not examine the damage until later. It appears the damage is only cosmetic and not structural and that is good. The whole episode could have been much, much worse.

I will not be overdramatic, but this could have ended in a very bad way. Thank God for His protection and His help.

We put out the traffic triangles, which did not slow traffic down at all, unhooked the car and walked along the road thanking God for all the good things.

Jeff and one of his men arrived in a few minutes, accessed the situation, helped us get to a better place to park and then he and Dan took care of the brakes. He suggested going back to his shop so that the brakes could be examined closely and we were glad to do it.

So two hours after we left we were back in Vonore up on the lift. 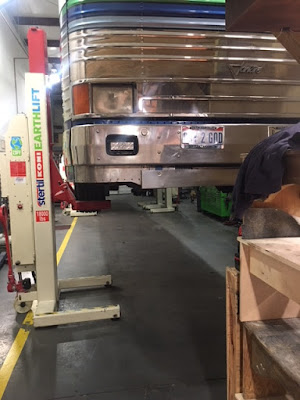 Everything seemed to be working fine with the brakes and Jeff could not find any additional problems. After a 20 mile test run with lots of stop and go, braking and accelerating, it was determined all was well.

Nearly 5 hours after we left the first time, we hooked up the Green Machine and left again. We stayed very alert to the smell of hot brakes and stopped several times to check the temperatures of the wheels. In hindsight, we probably should have stopped somewhere for the night, but we did not realize how frazzled we were until we pulled into the barn.

We made one more stop at Flying J to fill up with diesel. We did not need fuel, but if the bus is going to sit for a couple of weeks in the barn, I like the tank to be full to prevent too much condensation. 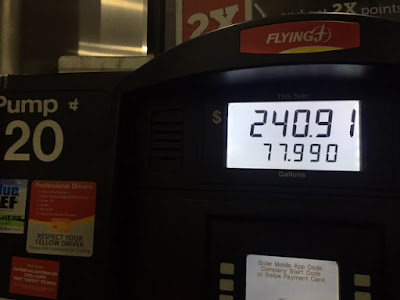 After fuel it was home and hugs all around. Oh, and chili. Do not forget the chili!

Our nerves are still a little ragged and our bodies feel it, but we have some great things to be thankful for.

Yep, that was an exciting day.

Davy
Posted by Davy, Kelly and Odie Boggs at 2:30 PM