Time For Christmas Break in February!

Yep, Merry Christmas! It is time for Christmas break.

We did not get home until December 23rd for our normal Christmas break. Between our joyous fellowship with family Christmas Eve night, all day on Christmas, the responsibilities of the house construction, preaching a couple of places and then attending revival at our home church, we missed the benefit of resting during Christmas at home.

We have no complaints. We knew it would be that way when we scheduled the end of the year. So, we built a Christmas break into our schedule the first full week of February. We planned to park in a RV Park some where in the Mobile area, rest, work on the BoggsMobile and spend time as a family.

Pastor Mark Compton visited our first revival of the year in Pine Prairie, Louisiana and asked if I had any time to come to his church while in Texas in February. I had just been telling his son Silas about taking a few days off. When Bro. Compton asked about us coming, Silas and I started laughing!

It had been about four years since we had been to the church Bro. Compton pastors and we needed to go back. That is how we came to be at House of Prayer in Mauriceville, Texas on Sunday night, Monday night and Tuesday morning for chapel service. 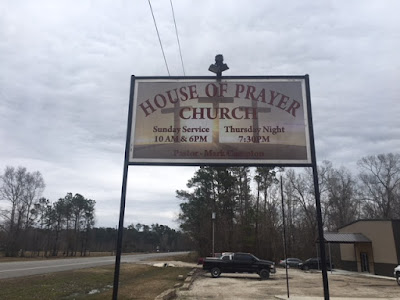 I am sure we would have been in church Sunday anyway so we were only adding Monday night and Tuesday morning. The two church services were wonderful and the response to the preaching was outstanding. The school chapel service was chocolate icing on top of chocolate cake! We appreciate the fine hospitality of the House of Prayer in Mauriceville, Texas.

Some of you have been praying specifically for Bro. Compton and his church since Harvey swept through and flooded their newly constructed church and newly constructed fellowship hall. The flood waters also severely damaged the parsonage.

There was no record of the property ever flooding before. They were taking precautions but there was no thought at all that the church property would flood.

That all changed when the men were driving toward the church very late at night after trying to keep other properties from flooding and they found the road was covered in water. They realized immediately that all of the church buildings were in danger.

Within hours, the water had risen several feet in their parsonage and in their new buildings. It was very heartbreaking but the church folks pulled together and with help from people all over, they are dried out and very far along in the repairs. They are able to have church in the sanctuary and school in the other building.

They are finishing drywall now and have some more trim to do. Then they will be ready for paint and carpet. The parsonage was uninhabitable but they are repairing it as well. I did not step into the house so I do not know how much remains to be completed.

Some of you may not realize that home owners insurance does not cover flooding from rising water.

If the roof was ripped off and the rain flooded the house, that would probably be covered.

If the sewer backs up at the street and floods the house, that would probably be covered.

If the water hose to the washing machine breaks and floods the house, that would probably be covered.

If it rains nearly 60 inches and waters rise and flood where it has never flooded before, you are not covered.

It is a miracle they have been able to recover and thrive in this short amount of time. God has blessed them and encouraged them. 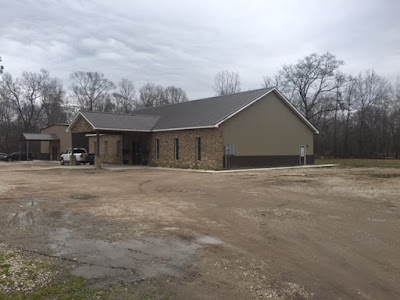 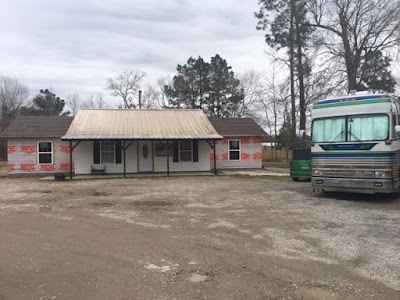 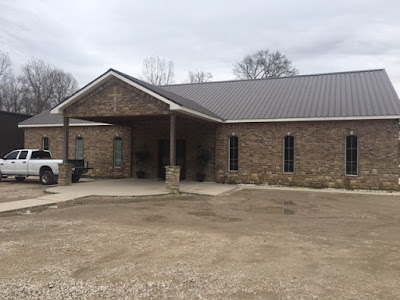 The rest of the week was Christmas break. ☺️

Well, at least it looks like Christmas at the Lazy OD Ranch. My brother Steve took this Wednesday and sent it to me. 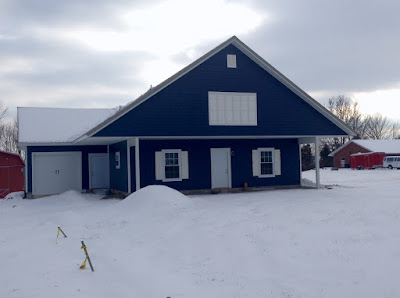 Our Christmas break plans have shifted some since we left Mauriceville, but it was even better in one respect. I have three BoggsMobile projects that I had on the agenda this week and all three of them require working outside.

Weather canceled the work and it has been all rest!

Working outside is out of the question this week. It has been raining steady most days and it turned cold too. Not cold like the picture of the house above, but cold enough to make it miserable, especially if you are working in the rain.

The good RV Parks around here are $50-$70 a night. I could swallow that if I was going to work on the bus. But we can rest in a rest area, the parking lot of a Walmart, Sam's, Lowe's or Bass Pro.

There seems to be an endless supply of campgrounds and RV parks in the whole Houston area, but not as many that can accommodate the bus easily. This is a very popular place for snowbirds this time of year. Also, some families displaced by Harvey and living in RV Parks. We are satisfied to park each day in a different parking lot where it is allowed.

I guess we are spending Christmas in the way we are accustomed to living, On The Road Again.