Life Is Short, Eternity Is Long

I first posted a version of this in April nearly five years ago. I have known for several weeks that I needed to post it again and today "feels" like the day. A church friend that was only one month older than me passed away suddenly last week and my heart is overwhelmed again with the brevity of life.

Life is Short. If you live to be 100, life is still short. In the light of eternity, this life is so short.

In this picture I am probably about 13 years old. I had known most of these kids all my life and that seemed like a very long time. 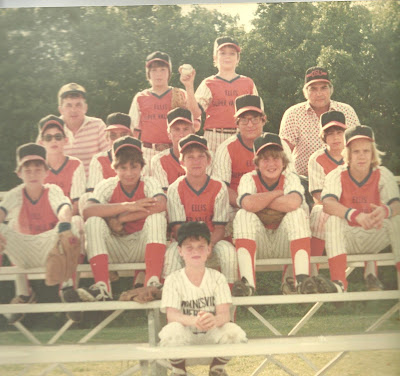 Winning a baseball game was probably the most important thing on my mind at the time. My friends and I wondered why we could not play more games in a season. We should play four or five times each week. What is the big deal? Let's play ball. Let's play two games every night.

The coaches, parents, umpires and everybody else involved had life to deal with and we just had baseball. We had not yet learned that there were more important things than baseball. It seemed like an eternity passed if we had to wait a week between games.

At that age I also spent an awful lot of time on the bank of the Little Miami River and along the spillway of Caesar Creek Lake. I had to do something to fill the eternity between games. Two of the guys in that picture were with me a whole bunch of that time. I guess fishing was pretty important to us too.

Nearly 38 years have passed since that summer and time has flown by. There are days that the time elapsed seems more like 38 minutes instead of 38 years. A week is no longer an eternity. A week is a blink of an eye. A year does not drag on forever, it races by with a roar and a flash. Where did the time go?

As time moved along, the priorities of life changed too.

I can not remember the last time I played baseball or cared one little ounce about baseball. Spending the night sleeping on the ground by the river as close to the fire as I dare, does not sound fun at all. Life has moved on and I have moved with it. And it moved so fast.

The week I first wrote this in April of 2013 all of the kids in the picture above were still riding the speeding train of life, as far as I know. The day before I wrote it, one of them was laid in the ground. I attended his viewing. His brother told me that he was talking one minute and that he was dead the next. He literally fell over dead in mid-conversation.

Life is short and it does not take long to die. 13 years old and nothing to worry about but baseball and fishing. The next thing you know, the years have flown by and you are hanging on for dear life.

Life is so full of things and stuff, joys and problems, family and friends, jobs and obligations, bills and payments, laughter and tears. You do not have time for anything else. How can we fit one more little thing in to our busy lives?

But since life is so short and so crowded we MUST take time to prepare to die.

We can not save ourselves. We can not prepare ourselves. There is no one that is good enough for God. But God loves us so much that He sent His only begotten son to die in our place, that whosoever believes in Him should not perish but have everlasting life!

-How can we prepare to die?

-Realize you are not good enough for entrance into Heaven. You can not be good enough. Ever.

-Believe on Jesus Christ, the son of God, as the only remedy for sin.

-Trust Him for your salvation.

-Allow Him to radically and completely change your life.

-Devote yourself to Him and to righteous living.

-When this short life is over, you will be so glad you lived it for Christ.

I have made my decision and everyday I am renewing myself to that commitment.

Have your made a decision about what to do with your short life?

Davy
Posted by Davy, Kelly and Odie Boggs at 5:47 AM

Email ThisBlogThis!Share to TwitterShare to FacebookShare to Pinterest
Labels: Preaching, Something to Think About