Last Friday I finished up the high electrical work while Dad put the finishing touches on the panel and switches. For some reason we did not get many pictures. 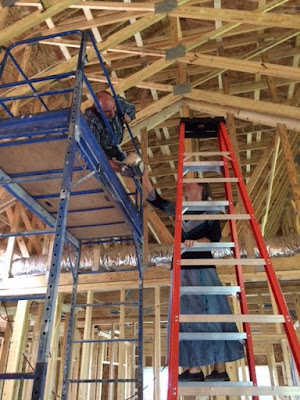 The ladder that Kelly Jo is standing on to hand me the can light is a 12' ladder so that gives you some perspective.

The light near the upper right in the pictures below was the very last of 51 recessed can lights to be hung and wired in the house. Men love darkness because the deeds are evil. We love light! 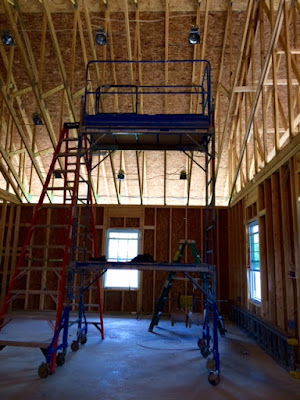 I am planning to do a wood treatment on the tall ceiling in the living area and kitchen so I will be very acquainted with the top of that scaffolding before it is finished!

I mentioned the other day that Duke Energy installed a new pole across the road. The next day they put one on our side of the road and the next day finished wiring them up. They installed a new transformer across the road. The old one was overloaded from trying to handle several houses. We hope that will solve some of our erratic voltage problems. 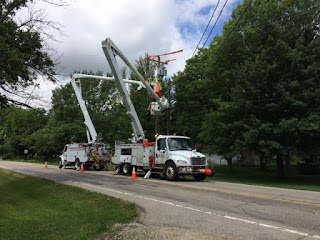 Monday was scheduled to be inspection day on the house. The same inspector examines the framing, electrical and HVAC. In Warren County you call the building department on the previous business day and I did that Friday. Then if you want to know a more specific time, you call between 8:00 and 9:00 the day of the inspection.

The inspector told me he would arrive around lunch and he was right on time. One thing that I did not know was that the roof must be completed before the framing inspection can be completely approved. Oops!

I apologized for bringing the inspector out without the roof on but he was cool with it. He went ahead and completed a thorough inspection and will come back after the metal roof is finished.

He gave me a small list of things to correct and that list was knocked down in very short order. Here are most of the items from memory.

-There was one place on the base plate of the framed walls that needed and additional anchor into the slab. That was the only framing item. Not bad at all.

-The main electrical service cable needed to be moved over about six inches as it exited the garage so it would not be near a 2x4 an attract a stray drywall screw or exterior siding nail.

-There were three places where it looked like electrical wires might be laying on he metal gussets of the trusses. On closer inspection, they were all fine but I stapled them over a bit anyway to remove the "very appearance of evil."

-Two pieces of PVC going into the panel needed metal protection plates inside and out, again to protect from screws and nails. I should have seen that one.

-I needed to put 2x4s next to wires running near the attic access to prevent someone (me) from stepping on the wires in the future. Dad had reminded me of that and I forgot! I am a lot like those "Three German Police Dogs" Wendy Bagwell told about. (That is probably an obscure reference for some of you.😀 Look it up.)

-The bathroom exhaust fans are vented to the outside. I had run the flexible duct about one foot above the ceiling and strapped it to the uprights of the trusses. The inspector said they needed to be insulated to R-4 if suspended above the ceiling but did not need insulation if laying on the ceiling. No problem, done.

I think that is about it. He said everything else looked good and was sufficiently impressed with the neatness of the work. Dad's work in the panel and every where else looks great and I am thoroughly impressed myself!

The plumber's helper was here a big part of the day Monday and I am hoping they will be ready for inspection very soon.

That wraps up today's post. Thank you for stopping to sit a spell with us.

Davy
Posted by Davy, Kelly and Odie Boggs at 3:42 AM