After six weeks in the hospital, six weeks of doctors, nurses, tests, needles and procedures, six weeks of uncertainty, fear and angst, the baby was born.

It was months away from the due date. It was way too early for the baby to be born, but born it was.

The baby came late in the evening. It could not live long, but it lived long enough to capture their hearts. There had been a longing in those hearts for months. They looked forward to the baby. They pondered long and hard for the right name.

They imagined the future, but the future had come to soon.

They only had a few hours together, but the love that had drawn them for months now consumed them. They were hooked! The hot coals that had warmed their dreams now burned brightly as they held their little bundle.

It seemed a little strange at the time, but they perceived they were not the only ones holding on. The little baby was holding on too. Each time it would find a finger of Mom or Dad, it would wrap its little hand around it and hold on with all it had.

Did that precious baby realize that it had an uncertain future? Could it know that its hold on life was temporary at best?

They went home the next day. They left that hospital and went to their little home with empty hands. Their hands were empty but the hearts were full of emotions.

They were grieving, of course. They were sorrowful, heartbroken and sad. They were confused and shaken. What to do with their big plans? Where do they begin to pick up the pieces?

They were also disturbed by the contrast of their emotions. They were relieved that the long, difficult ordeal was finished. They were finally waking up from a six week nightmare. Yet they were guilt ridden because they felt relieved.

They had no one to tell them those wildly conflicting emotions were completely normal in their situation.

With the help of their families and their church, they stumbled through the next few days. They planned a graveside service. When that day came, they made it though somehow, by God's grace.

The day was beautiful. The preaching was perfect. The singing was tremendous. The people were kind. The families were loving.

The Daddy carried the little casket and vault himself. He placed it in the ground with his own hands. When it was over the Mom and Dad carried each other back home. The family came and comforted and then they left.

They healed one step at a time. They trusted God and trusted each other one day at a time. Since then they have put their arms around many, many Mommys and Daddys that were grieving and had nothing of value to say. But they knew how to cry with them and they knew what Not to say.

Recently they stood and held each other at the grave. They were 30 years removed from the events that forever changed their lives. It has been an incredible journey full of twists and turns. Could it really be 30 years?

Yes, 30 years have slipped by in a few moments time. They stood there and shed some tears. They cried a little and laughed a little. They talked of love lost and opportunities missed. 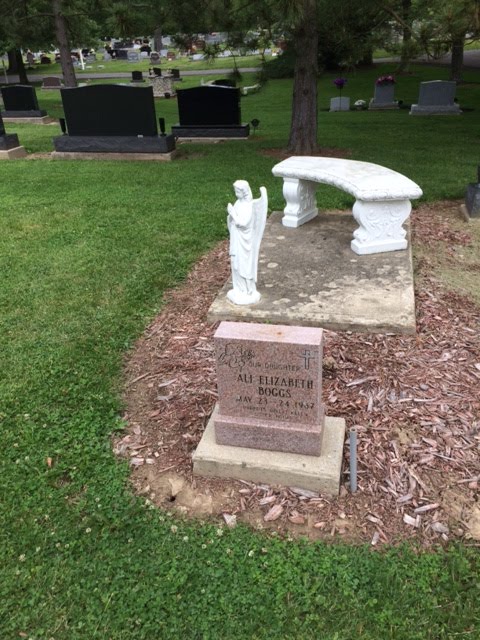 That is enough to bring comfort now.