I rested Monday as planned and went back to work Tuesday after lunch at Acapulco. I had several things that needed attention on the tent trailer, the bus and the Lazy OD Ranch. I have made a little progress on all of them.


When Dad was helping me move the tent trailer after taking the tent down Saturday I noticed a little problem with the tongue jack. It is hydraulic and it sounded like it had air in the line or something. I checked the reservoir and it was low but not extremely low. I went to the auto parts store to buy some hydraulic fluid and left empty handed.

Who knew they make different viscosity hydraulic fluids? Let me see your hands? Well, I sure did not. For normal hydraulic operations there are two, AW 32 (10W) and AW 46 (15W). They can pretty much be used interchangeably but you can not mix them. My 1997 Featherlite trailer had no sticker or label to let me know which was in it.

I researched on line and asked every one I could think of with no answers. Then I called a Featherlite dealer and he gave me the number to THE Featherlite guy the "knows everything about Featherlites." You know what? He really does.

He told me Featherlite uses neither AW 32 or AW 46 in their lifts. They use ATF or automatic transmission fluid. Mystery solved. I topped off the tank like he told me and hopefully that takes care of it.

I have several electrical things I want to do in the barn and I have tackled four of them this week.

I also mounted a 4' LED inside the front of the barn and switched it at the door.

There is also a platform on the other side of the barn where we stored a bunch of stuff up top and I created a tool crib underneath. I mounted another 4' LED in the tool crib and put it on a switch. That  is all the electrical I plan to do while home this time. 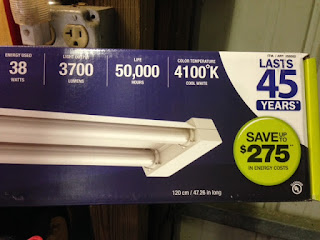 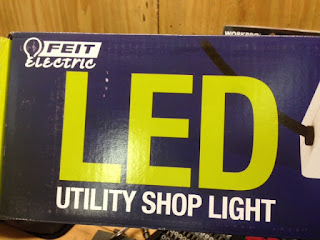 Bro. Trenton Metheny from Riverdale California showed me these. They hung them on the center poles of their new tent and I may try the same later this year. They are very bright and light and are supposed to last a long time.

I also changed the lock on the man door on the barn with new keys for all. 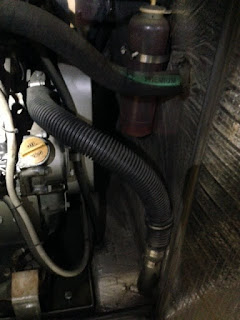 The hose at the top in the picture ABOVE goes through the wall of the quiet box to the top of the radiator. It was a specialty hose that cost me 10+ trips into three different auto parts stores. Yes, I am on a first name basis with several new friends.

The hose in the bottom of the picture ABOVE goes through the wall of the quiet box to the bottom of the radiator. It is actually three different shaped hoses glommed together to get the job done. 3 or 4 of those previously mentioned trips into the parts stores involved finding the correct hoses to recreate that. 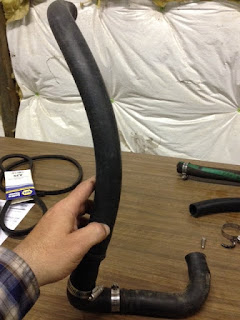 I would have missed this hose below completely if it had not been for the good folks at Martin generator that asked me if I had ever changed it. It is behind the guard that also covers a belt that I knew nothing about until last year. I special ordered the hose in the spring and changed it and the belt this week. 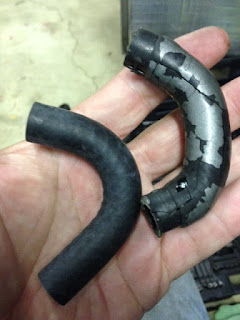 This really became a three day project completed between trips to town and other work. I finally got it all put back together yesterday evening, added coolant, cranked it up and let it run about an hour and 40 minutes. The coolant circulates correctly and no leaks. I am calling it good. 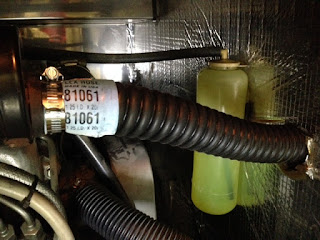 I mowed the grass, lots of grass, last week during tent revival with a great push mower that my brother Steve found in the trash. It was a lot of exercise to say the least. My Dad and my cousin Gerald Livingston have been working on a mowing solution for quite a while and it all came together yesterday.

Cousin Gerald sold his place about the time we bought the Ranch in December. He brought his tractor over here to help Dad remove the fence posts and then stored it in the barn. They picked up a finish mower that needed a little TLC and Thursday it was ready to go.

I took a few minutes to mow in the afternoon and it does a fantastic job. 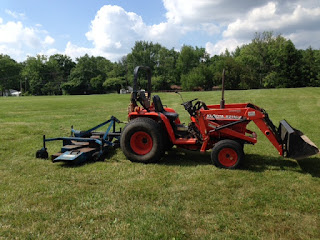 All work and no play makes Davy a very dull boy.


All work and no eat makes Davy a very sad boy.


I have been eating a little Acapulco for lunch and Kelly Jo has been fixing a tremendous meal for a late supper. This is chicken, mushrooms, squash, onion and parmesan cheese!  Wow! 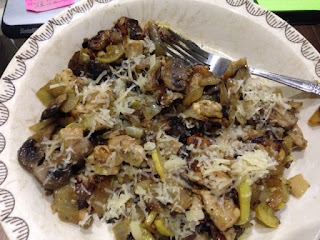 I may have missed a thing or two but that is pretty much it. Have a great weekend.

Davy
Posted by Davy, Kelly and Odie Boggs at 7:41 AM

Email ThisBlogThis!Share to TwitterShare to FacebookShare to Pinterest
Labels: BoggsMobile, The Ranch