Here are the totals for Tuesday. 380 miles makes for a pretty light day as far as driving days go. But the amount of time stopped in the lower right corner, one hour and forty five minutes, gives a little clue to the adventure. 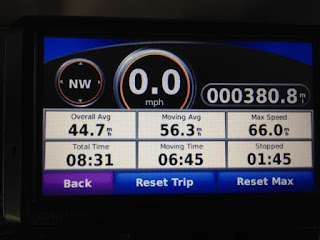 We had not gone five miles yesterday morning when a warning light came on that I had never seen before. It said House Batteries Low. What? How could that be?

First, when the batteries are good we have enough battery power to run an air conditioner for several hours without plugging into electric. After we turned off the generator at bed time Monday night we ran the fan but no air. The batteries should not be low.

Second, IF the batteries get too low the generator was set to start up and run. That did not happen. Therefore the batteries should not be low.

Third, when the batteries were bad three years ago and they did get very low this House Batteries Low light did not come on then.

I smell a rat some where.

I pulled into a very conveniently placed rest area and went to the electrical panel to check the inverters. Both inverters were in error but the house battery voltage was not low. It was high. Evidently the warning light is for low AND high voltage. I thought something might be wrong with the inverters so I cleared the errors and started the generator to see if things would even out. Nope, right back into error for high voltage on the house batteries.

The eight 4D AGM house batteries are very expensive and a bear to change. I did not want to boil them so this is a serious problem. I turned off the engine and the over charging of the batteries stopped immediately. Ok, there is a clue, Shaggy. No engine, no overcharging.

That told me there might be a problem with the bus alternator. I went to the back with my voltage meter and had Kelly Jo crank the engine and the alternator was putting out 35.1 volts instead of 24-26. Oops, that is not good.

I checked the wires and connections and everything seemed good. That was pretty much the end of my trouble shooting ability. I called Jeff Rowe at East Tennessee Luxury Coach and thankfully he was available for a moment. I brought him up to speed and he had me do some additional tests. He came to the conclusion that the external voltage regulator is probably bad. 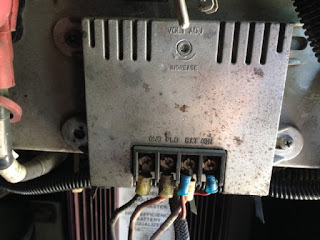 He told me which wire to disconnect so that the alternator would not charge and then gave me advice on how to proceed. I turned on the 24 volt trickle charger I installed last August, cranked up the bus and rolled on down the highway.

We tried to find a voltage regulator in St. Louis, Springfield and Tulsa but no one we called had it in stock. I finally ordered it from Prevost and had them ship it to Wichita. Today and Wednesday we will run the generator and trickle charger to keep things going while we drive as we did today.

It was a rough day and my nerves are frayed down to bare copper but there were some very good points to the day and I am thankful to God for every one of them.

-At least I am not pastoring a church.

-We had a safe place to pull off the road when we needed it.

-I knew what to check and did not waste a lot of time running in circles OR falling apart.

-Jeff Rowe was available, willing to help and knew what to do so I could roll.

-We had a safe day and good weather to drive in.

-Diesel was $2.41 in Missouri and that is a whole lot better than $2.85 that I passed up in Illinois, Indiana and Ohio. 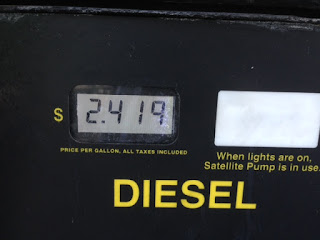 -Finally I am thankful we made it to Coachlight RV Park in Carthage, Missouri.

We have stayed here a bunch of nights in the last 12 1/2 years and we are very familiar with the park and the long level pull thru sites down at the end. We purchased our 2004 Kountry Star fifth wheel next door but we have stayed here in our 1984 Hitchhiker, the Kountry Star and the BoggsMobile many, many nights through the years.

One night here an RV burned to the ground. Another night we spent part of the night in a tornado shelter with all the folks AND their cats and dogs and way to many senior citizens in their night clothes. It was not a pretty sight. Other nights we have had no excitement at all, thank God.

It is relaxing to be some place familiar at the end of a long stressful day. 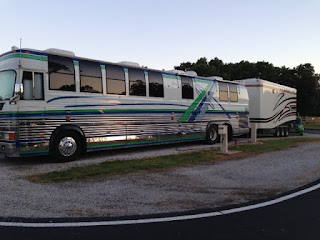 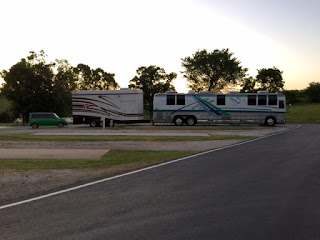 We are supposed to pick up our new tent section this morning less than an hour a way so last night we removed the Green Machine and prepared the trailer to receive the tent and poles in a little while. It was a lot of work to put the car in the trailer with all the extra chairs but it saved Kelly Jo a bunch of hours of driving so it was worth it. 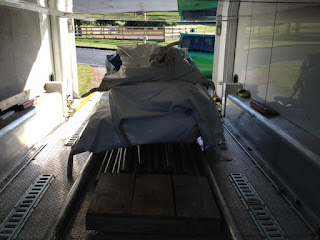 After all of that I was ready for bed but we had not taken time for a meal all day. Odie offered to take us to El Charro about 3 minutes away so after she twisted my arm I agreed to go. Thanks, Odie Podie Pickle Hymer Schmidt!

If the BoggsMobile will crank up then we will be on our way shortly.

Davy
Posted by Davy, Kelly and Odie Boggs at 6:44 AM