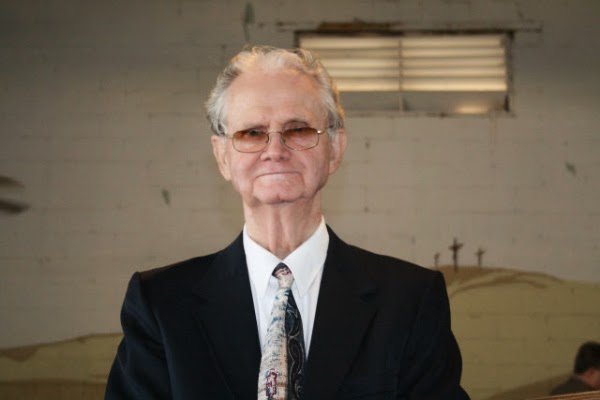 I have heard Bro. Ralph tell it dozens of times. When he was born in 1928 his dad said we are going to name him Ralph. His mother asked what his middle name would be. Bro. Ralph's dad said, "No middle name. Ralph Cox is enough." Then Bro. Ralph would say, "AND it was!"


Ralph was saved 21 days after he turned 21. (If you heard him preach more than once, you already knew that.) He completely surrendered his life to God and God used him to pastor churches and evangelize all over the USA. He preached the day services at our home church fellowship meeting for many years. We heard him there, many years at Bond, Kentucky campmeeting, at Richlands, Virginia campmeeting and various other places many, many, many times.

I have no doubt listened to Bro. Ralph Cox preach on cassette tape and CD for hundreds of hours. I do not remember a single revival I have preach that I have not quoted Bro. Ralph Cox at least one time and probably multiple times. His preaching had a huge influence on me and my family.

The first holiness campmeeting we ever attended entirely other than Dryden Rd. was in 1989. We had went to Bond campmeeting for two services in 1988. In 1989 we went for the whole week. Bro. Cox was preaching the day services. He preached four days. He preached on Church Brats, The Blood, Tithing and The Furtherance of the Gospel. The last one is the message where he quoted the poem/song Gospel Snakes. Odie and I listened to that sermon so much that we can still quote Gospel Snakes the very way he did 25 years later.

Those four sermons had a huge impact on our lives. Bro. Cox's preaching continued to influence us. He had a way of saying things that spoke to us, encouraged us and challenged us. He was plain but not mean. profound but spoke in simple terms and he was confident in the Word but not arrogant. He made great effort to speak in a way that people could understand him and be affected by his preaching. And the Boggs family was affected.

Yet Bro. Ralph was much more than a preacher to us. He may have helped us even more by the words he spoke to us personally. He put his arms around Kelly Jo and I when we needed friends the most and helped pull us through the most difficult portion of our lives. I think I can confidently say I am living a Christian life and preaching the Gospel today in large part to the kindness, compassion and wisdom of Ralph Cox.

Until just a year ago or so Bro. Ralph continued to preach and travel as much as he could. He would often be in attendance when we preached revivals at his home church the House of Prayer in Tulsa, Oklahoma. It was always a privilege to preach for Pastor Bill Parks and part of the thrill was getting to see Bro. Cox. He was a Godly man, great preacher and our treasured friend.

Goodbye, Bro. Ralph. We will meet you soon!

Davy
Posted by Davy, Kelly and Odie Boggs at 4:23 AM