Here is Odie singing Monday night during the altar service at Anchor of Hope. 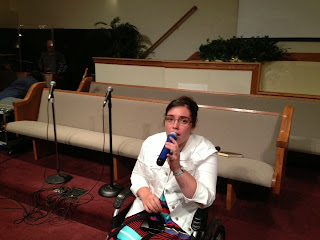 Edit: Kettering Hospital called Odie on Tuesday with approval for the MRI the neurologist ordered. She is scheduled to have that on Thursday night.

Odie had her first appointment with the Neuro-Ophthalmologist on Monday morning. She had been seen by an Ophthalmologist in his office in April and this was a follow up appointment. She was there to have all the tests repeated so they could gauge her recovery. The tests in April served as a baseline test and those test were administered about two days after the Lord began to restore her sight so we knew they would reveal a big improvement.

AND THEY DID! The doctor used words like dramatic, impressive and incredible to describe the improvement between April and now. He told Odie her vision was a thousand times better than it was in April. Praise God! As we have said before Odie's vision in her left eye is not 100% but it is close and we are thankful to God for His help.

We do have more on this that we would like for you to pray about. IF Odie's sudden blindness was caused by Optic Neuritis it is possible it occurred on its own with no underlying cause. There is about a 20% chance that the Optic Neuritis is a symptom of something else and one of those other causes is MS. The MRIs and spinal tap and other tests have been ordered so they can rule out MS and the other causes we are less familiar with and can not pronounce.

We do not have a final answer yet but we are believing God for a clean report. Would you help us pray? Would you rebuke the enemy and ask God to give us complete victory in this. We know He is able and we are trusting Him for this help.

Odie is scheduled for another round of the tests she had today when we return home for campmeeting in August. We should know more then. Until then we will seek God and serve God.

Email ThisBlogThis!Share to TwitterShare to FacebookShare to Pinterest
Labels: Odie, Praise The Lord