Most of the posts have been about City Reach lately because that is what our life has consisted of the last few months AND will consist of for the next few months. That is what this blog is about.

We post about the grace of God, great churches, Pastors, people, revivals, music, family, food, fellowship, fun, our travels and who knows what else.

Most of that "what else" has been City Reach recently. We did have a great experience last Thursday evening and I want to tell you about it today.

Meet Bro. Larry Smith a door gunner in a Rattler for 27 months in Vietnam. 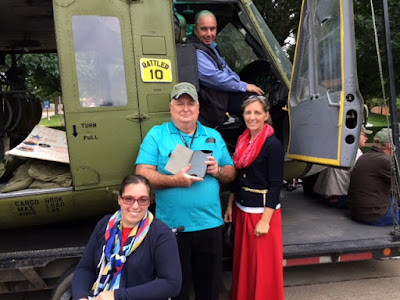 We arrived in Ft. Worth on Thursday morning after a long, long drive from Atwater, California. After a busy day preparing and planning for the tent set up, we had very special plans for Thursday evening. Our dear friend from Ellisville, Mississippi was at a reunion near DFW airport and we were anxious to see him.

Bro. Larry Smith goes to First Assembly in Ellisville. We have been preaching there for Pastor Kenny Morris and his great folks for many years. We always look forward to being with our dear friends in Ellisville and it seems that God always blesses the revivals there. It is one of our favorite stops of the year.

One of those tremendous people is Bro. Larry Smith! When we were there in January I told about our City Reach campaigns and mentioned City Reach Ft. Worth would be in May. Bro. Larry told me after service that the reunion of his 71st Assault Helicopter unit was scheduled for Ft. Worth in May.

Bro. Larry not only attends these reunions held every two years but he was instrumental in getting them started over 25 years ago. I copied this excerpt from their website.

Origins of the Rattler/Firebird Association

In the fall of 1990, Larry Smith, an old gunner of mine from '66-'67, called me and asked if I was aware that the 145th Aviation Battalion had an association. I told him "No". He then told me they were having a reunion at Ft. Rucker in June of '91. Larry and I agreed to meet there.
We talked Dennis Hand and Donnie Profitt into attending also. At this reunion, we rediscovered feelings long suppressed from Vietnam. We had no interest in battalion level people, because we did not know them. The four of us stayed in one hotel room and let the memories fly. From that four person meeting, the spark was lit to get the guys back together as best we could....Ron Seabolt National Director Rattler/Firebird Association
Bro. Larry and I both were excited to learn the dates of this year's reunion would coincide with the week we were arriving in Ft. Worth for City Reach and it was being held at a DFW hotel. We made plans right then to try our best to visit him and see some of the displays.

Bro. Larry spent 27 months as a door gunner in a combat helicopter. 27 months in Vietnam without ever going home! Bro. Larry is a hero is the first order and I was proud to stand next to him in front of an actual "Rattler" like the ones he flew on. 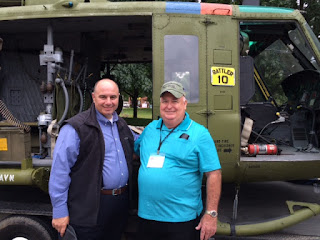 The radio call signs “Rattler” and “Firebird” were used by our aircraft during our service in Vietnam. “Rattler” was used by our UH-1D & H helicopters (known as "slicks") that carried troops, supplies, ammunition, performed command and control, combat assault, medical evacuation and insertion/extraction missions, as well as many others.

This is where the door gunner sat and stood barely strapped in, keeping both hands free to operate the gun that protected the helicopter and troops being dropped or those being picked up. 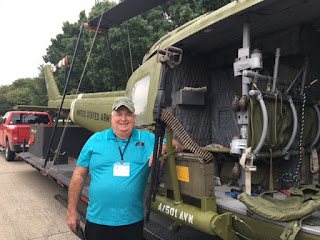 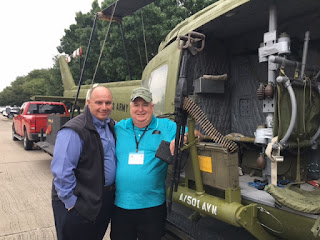 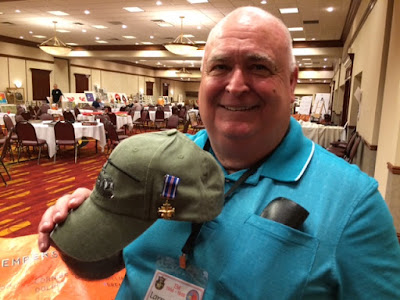 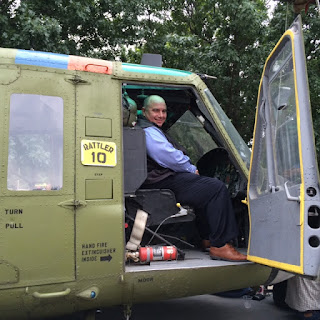 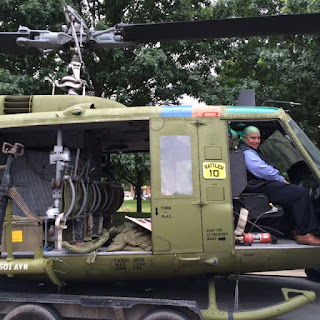 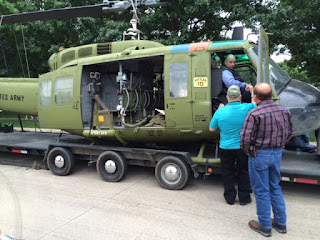 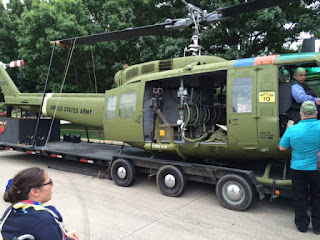 The pilot and copilot were surrounded by thin metal and glass making them very vulnerable to enemy fire. Bro. Larry said that one time the instrument panel between them was completely blown away but the pilot managed to land safely and the men were kept alive! 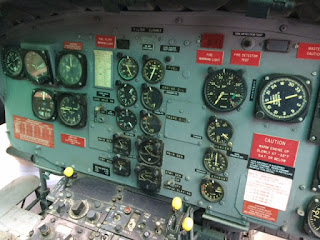 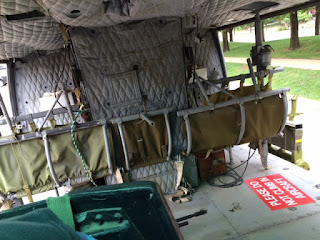 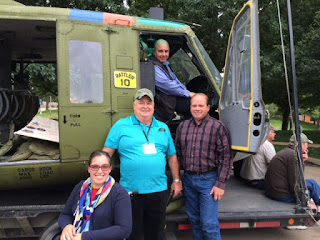 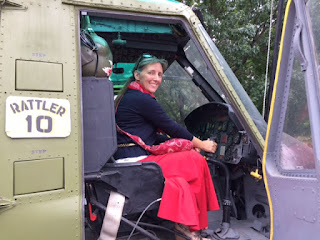 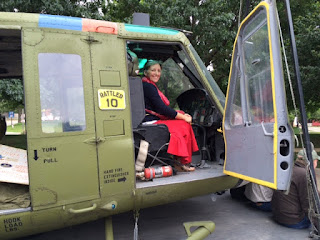 Can you read the tag below by Ron Seabolt's belt? 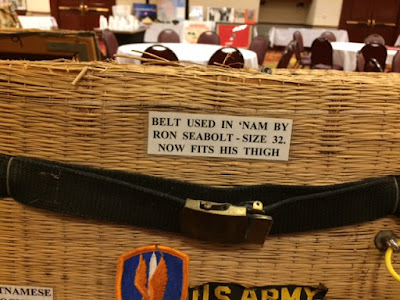 I resemble that remark!

I was blessed to meet Ron Seabolt and his wife and honored to pray with them. She is battling cancer and really needs God's help.

The display area inside was huge. This is just one small section. Reading some of the information was almost overwhelming emotionally. I am so prone to feel fearful, wronged, vulnerable and impatient or perceive unfairness in life, but these young men faced more in a year or two than I ever will. May God bless and help every one of them! 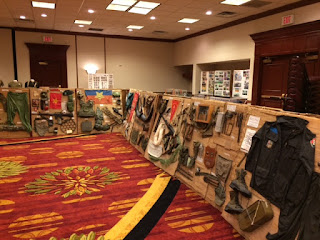 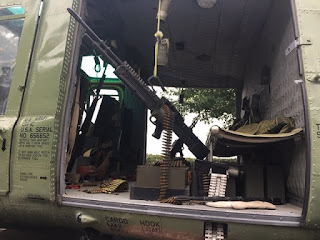 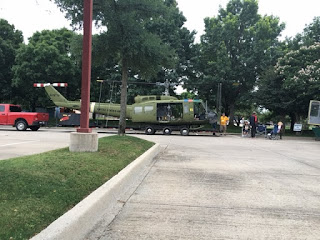 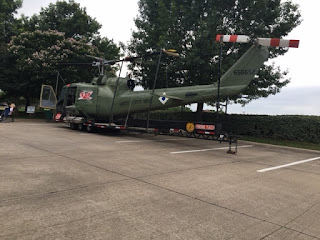 Kelly Jo wearing a vest that is supposed to help protect from bullets and shrapnel. It is so heavy she is about to fall down. Bro. Larry said it was so cumbersome and the door gunner had to move back and forth in the helicopter a lot. He said that he seldom wore it. It is a miracle that He is still alive! 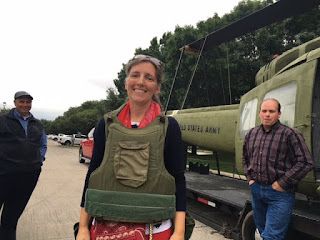 I have liked Bro. Larry from our first visit to Ellisville, Mississippi years ago. I always knew there was something special about him. Now I know a small part of what makes him special. He will be the very first to tell you that the very best thing that ever happened to him was the day he was saved. I know that is true.

But there is something special about a young man that will give 27 months of his life to keep others free. Bro. Larry Smith is a true hero.

I will stand a little straighter, tip my hat a little lower, set my gaze a little higher and hug his neck a little tighter when I see him next time.