We are having great services in Bloomington and we are enjoying our time with Pastor Deatherage, his family and his church. It is always fun getting to know new folks and this time is no exception. We are laughing, crying and rejoicing during service and laughing until we cry during fellowship. Yep, typical revival!

We are looking forward to the rest of the week. Odie is getting lots of pictures too. I will probably post a bunch of them Friday.

Wednesday morning was set aside for bus projects. I have been getting erratic readings on my 12 volt and 24 volt systems while going down the road. After doing some tests, checking some voltage readings manually and asking the experts I came to the conclusion that the actual voltages were correct. That is good news.

If the voltages are correct but the readings and warning lights are still erratic then what is the problem? It must be the monitor itself. That is one of the cheapest things in the system.

Here is the old one. 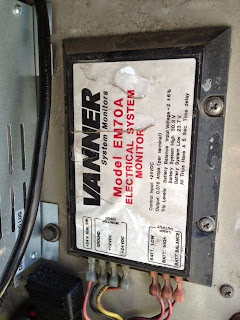 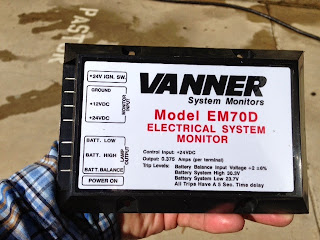 The new one installed. Probably one of the easiest things I have installed on the BoggsMobile. 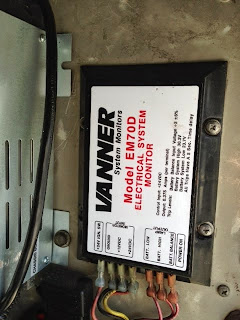 The old one was cracked all the way down on the back surface. There is no stress on the monitor when installed so that is a mystery. There is a good chance it is original so maybe it has been cracked for 19-20 years. Who knows? 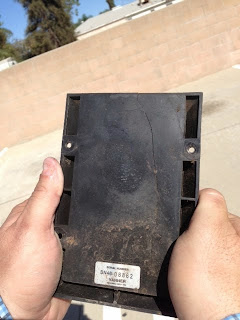 Then it was time to change the belts. The bus has seven belts and I can change six of them without a wrench since they are kept at proper tension by air pressure. I had installed the newest belts in July of 2011 and the three belts that go to the fan had been on there since June of 2009. The two serpentine belts appeared to be in great shape so I will keep them for spares. The five others were starting to show some stress from age. 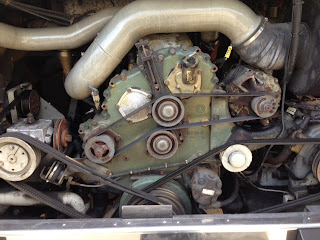 Here are some new ones. 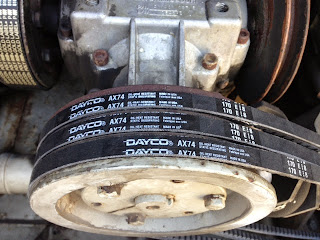 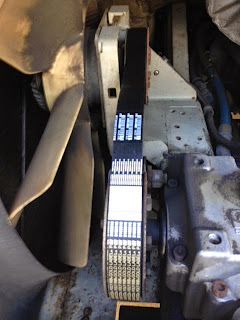 A whole set of belts is about $150. I already had a new set as spares so I put five of them on. I will buy some more and keep them as spares.

I did not change the two that look like they need to be changed the most. I could not get the two that go to the Air Conditioner to come off. I could remove them from the pulleys but could not slide them between the main pulley and the engine cradle. 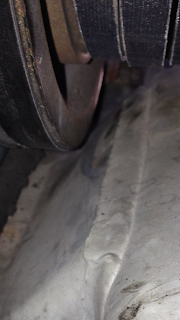 I have changed these belts twice before and the were very easy to remove and install. However I have not changed them since I had the engine cradle changed in 2012. That must have made a difference. The Prevost guys had them off when they did the change so that makes be think that I might be able to cut the old ones off and force the new ones through the small gap between the pulley and the new engine cradle. I am too chicken to cut them off until I get the opinion of some experts.

After I digest some advice from experts  I may try to get them off this morning. I will let you know what I find out. I hope you all are having a great week.

Davy
Posted by Davy, Kelly and Odie Boggs at 1:27 AM