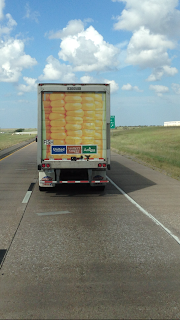 What an advertisement! A rolling billboard of lip smacking, taste bud exploding goodness of grease and sugar. Stacks and stacks of huge, delicious, fresh, hot Krispy Kreme donuts kept floating through my consciousness. 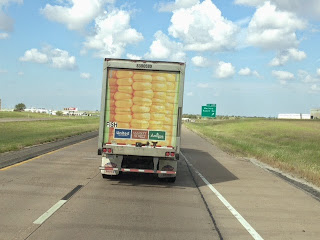 Who in the world would temp a fat guy with row upon row of heavenly donuts for mile after mile after mile? That is cruel and unusual punishment. Inhumane, barbaric, diabolical, heartless, cold-blooded, ruthless, merciless and uncompassionate!

I finally came to my senses and decided I needed to change the scenery before I fell off the wagon but good and pulled off an exit for three dozen donuts, two greasy and cheesy cheeseburgers and a large pizza.

I mean, I have proven my resolve when it comes to denying myself the saturated fats I have come to know and love. But this was ridiculous.

So stepped on the gas, whipped out into the passing lane determined to put this temptation behind me once and for all! This temptation was going to be miles behind me and eating my diesel fumes and dust. 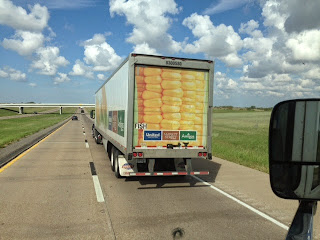 It was then that I saw the side of the truck... 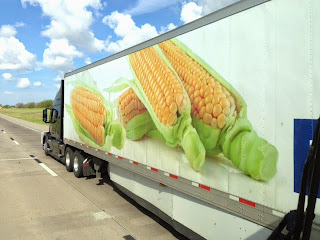 Corn? You mean I have been salivating over rows of corn on the cob thinking they were delectable donuts calling my name? Yep, it is a dead giveaway that I have been on a diet for way, way, way too long! 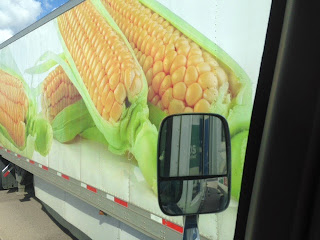 Ok, I can see that is corn now!

The rest of the day was beautiful. The weather was perfect, the wind was light and the BoggsMobile was running like a scalded dog! 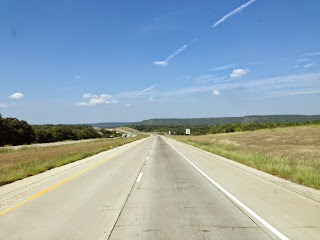 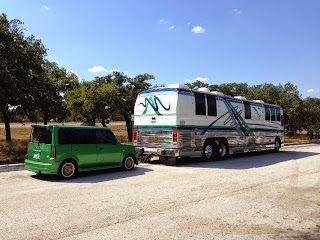 After a while the speed limit went to 80 and we were off to the races. 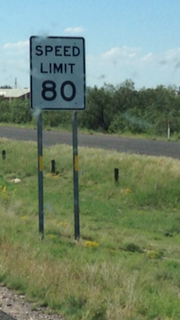 Actually I do not feel comfortable running the bus that fast even with the wide open road and the highway clear. I keep thinking of all the little men inside the engine trying to pour the buckets of diesel in fast enough and I always slow down.

We did make good time though. We were shooting for 430 miles or so and an overnight stop in Pecos, Texas. We were making good time and it was still early so we made it a 520 mile day and stopped in Van Horn, Texas.

We stopped in Van Horn for fuel again. 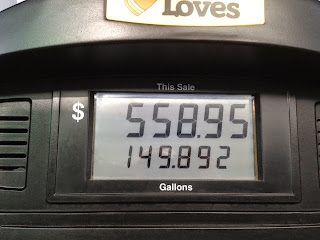 Then we pulled into a little RV Park two miles away. It was cool enough last night to park in a truck stop and not run the generator but we arrived here before 6:00 and it was HOT then. We would have been running two airs for several hours along with the generator for power. A cheap campground like this is less money than running the generator very long so the decision was made.

I also knew that Van Horn's finest will ticket RV's for parking any where but an RV park. What I did not know was that included truck stops. They have been known to threaten to tow RVs when the owners parked for a while at Love's or Pilot after fueling or stopped at Walmart to shop with no intention of staying all night.

Not a very RV friendly town but this little park is fine. The owner just bought it and is trying to fix it up and attract business since it had been closed for two years. I hope he does well but most RVer's avoid towns like this because of the solid NO PARKING stance of the city. Too bad.

There is some beautiful scenery to take in here though. The mountains were gorgeous last night. 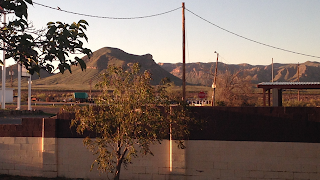 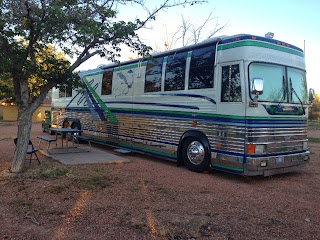 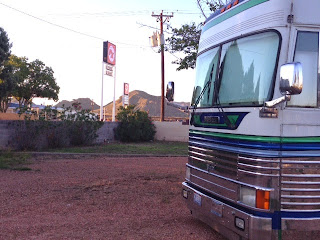 We will probably start a little late tomorrow as well. I am going to drag my feet a little so I can pass through El Paso just after lunch. We are going to try to eat with one of my first cousins if we can time it right.

Davy
Posted by Davy, Kelly and Odie Boggs at 5:37 AM