We made it back to the bus about 12:40 Thursday night/Friday morning. We drove the 725 miles in slightly less than 12 hours including an hour stop at Cracker Barrel and stopping for gas about a "dozen" times. The Green Machine gets great gas mileage but the tank seems only a little larger than a thimble.

We only needed a little gas in Claremore but since it was $2.81 a gallon I topped it off before we left. I ran it nearly empty to the east side of Little Rock and then filled up in Tupelo and Birmingham. The last two stops I needed only about a half a tank but we needed to stop any way. I also prefer to stop in big well lit places so that often dictates stopping a little earlier than I would have to otherwise. The gas prices were 26 cents different between Claremore and Birmingham.


As we were traveling across Arkansas on I-40 Thursday evening the eastern sky was beautiful. 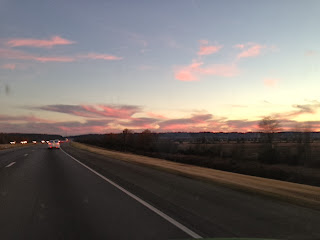 Just after we turned off of I-40 onto Hwy 78 in Memphis the little Green Machine turned over to 100,000 miles on the odometer. For those of you that may not know, the Green Machine is an Envy Green 2006 Scion xB. 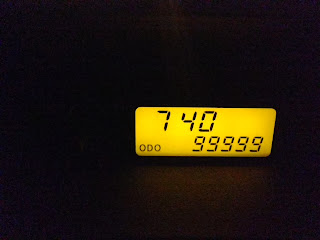 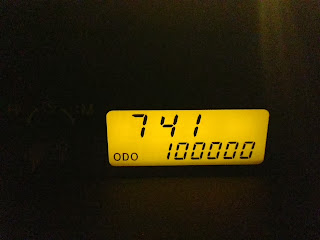 I wonder where we will be when it turns over to 200,000 miles? It had right near 74,000 miles on it when we bought it in May of 2012. That is about 1370 miles per month and less than 16,500 per year. That is not too bad for us at all considering we put well over 80,000 miles a year on our cars for several years when I was working a public job, living in one place and traveling to preach and go to campmeetings too.

At the rate of 1370 miles per month the Green Machine should roll over 200,000 miles in about 73 months. That takes us up until about the first of January 2020. Wow! It should be just about broke in by then.

The weather is beautiful here in Hokes Bluff today. It is 56 beautiful sunny degrees. It was way super cold when we arrived at the BoggsMobile last night. I left very little heat on while we were gone. I turned the thermostat way down low on one heater inside and one heater in the water bay. The one in the water bay is only a back up for a 70 watt bulb. The bulb was doing fine so that heater was not on even though it was 23 outside.

The heater inside was kicking on and off and the temperature inside was 42. That was perfect. Everything was above freezing and we were not using too much electricity. When we crawled into the bed we were wishing for flannel sheets though! I can pretty much guarantee you the bed will have flannel sheets tonight!

Saturday we start for Kentucky by God's grace. God bless you all.