A Name is Important

First some pictures of before, during and after deer damage.

The day after we bought it.. 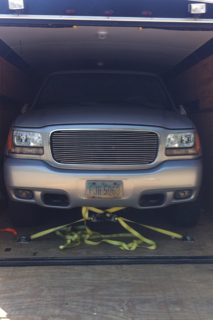 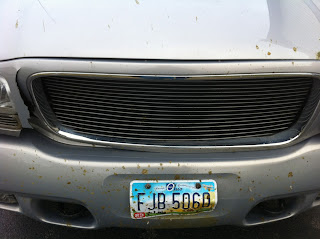 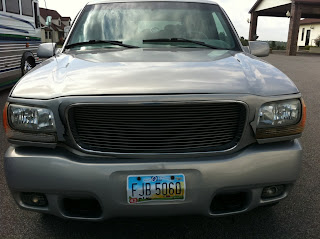 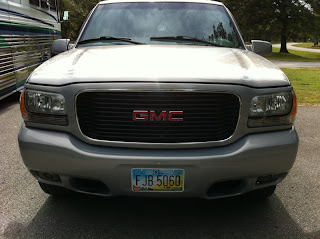 We travel along from place to place in the BoggsMobile. We have been pulling Mr. Cheap Jeep behind us for three years. Now that Mr. Cheap Jeep has been retired to a new home and we have a different vehicle to pull we have a little dilemma. What in the world do we call the 2000 GMC Yukon Denali?

My brother Steve has been brainstorming for a name. I don't know what got him started on a name hunt but we had been thinking about it among our little family for several days before. Maybe great minds really do think alike, grapevines really stink a lot, coal miners drink cold pop or something like that...

Anyway, nicknames usually come natural. There was no question early on that the motorhome was The BoggsMobile. The jeep was Mr Cheap Jeep from day one. Odie is just naturally Odie! Odie Podie Pickle Hymer Schmidt evolved very comfortably through the years. Kelly Jo became Kelly Jolene, Josephine, Jody and Josephus. They all just roll off the tongue with no effort. It's a long story and not nearly as funny as it was then but many years ago she was Kelly Jo Mary Vern for quite a while.

But a name for the 2000 GMC Yukon Denali hasn't come naturally. Maybe that's a clue he's not destined to be a long term member of the family. We usually keep cars until they are nearly unusable but maybe we are just a temporary home for him. Even so he still needs a name, don't you think?

What am I supposed to say to Odie? Go get in the Car? Truck? SUV? The GMC Yukon Denali? It all sounds so impersonal. Below is my brother Steve's list. He comes up with some great names and it is interesting to watch his considerable mind at work.

I'm a little partial to General Denali, Mr. Ed and Clarence. In fact I'm partial to several of them. Of course my favorite is his last one but it would never work.

"Odie, load up in the Peacelovedovebeadsbellsincenseandcrashpadsmanfaroutandsolid."

See? It would never work...

Can you help us? Cast your vote or give us a new suggestion in the comments. Do some brainstorming of your own. Have some fun with it.