Our Weekend was mostly driving and I need to go all the way back to Wednesday to set up the tale just right.

Wednesday afternoon, before the last night of revival at Desert Cove, we turned the BoggsMobile around so that we would be facing the exit Thursday morning. KJo took this picture before church. 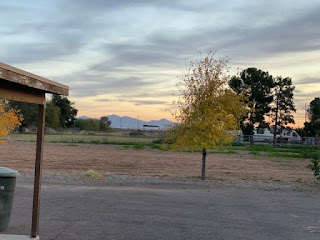 We had a very late night Wednesday and we did not get started as early Friday morning as I had hoped. I think we finally pulled out of Desert Cove about 7:30. The first few hours of the drive going north to Flagstaff and then east on I-40 is beautiful. It was cool, but very sunny and we loved the drive all morning long.

The whole day was great and everything went extremely smooth. The traffic was clear, the temperature was cool, the roads were in good condition and the BoggsMobile was running terrific. All of those were things I prayed about as we prepared to leave and I am thankful that everything fell completely into its proper place. 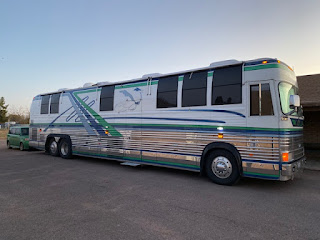 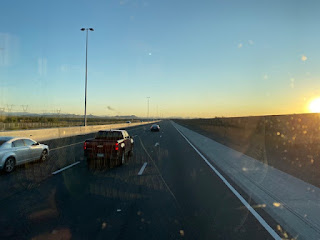 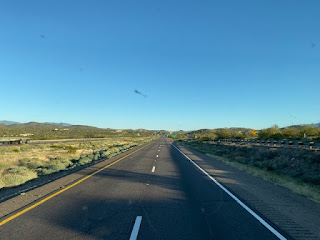 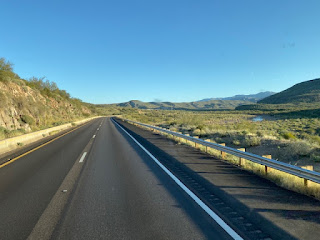 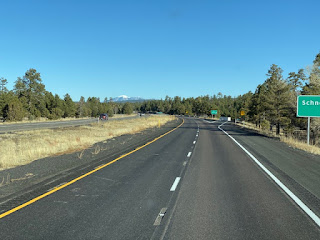 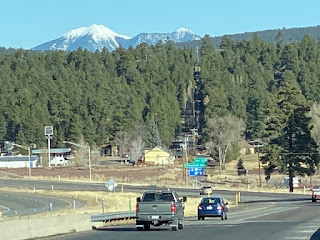 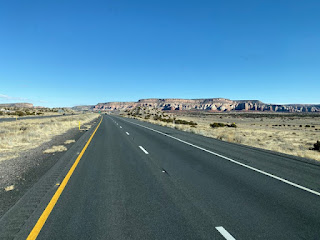 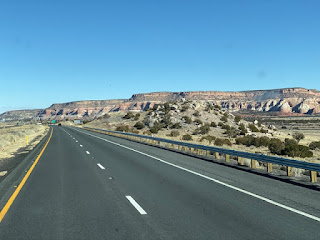 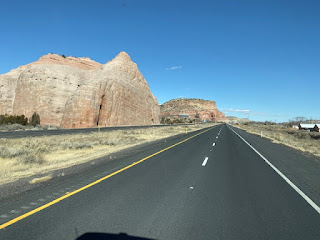 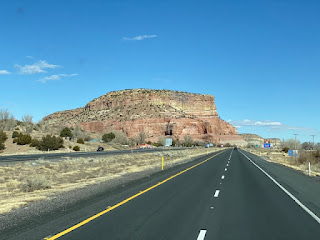 We stopped for the evening and night at a rest area near Santa Rosa, New Mexico. We have stopped there before, but this is the first time we have stayed here for the night. We were parked near a bright light and it felt as safe as day time. (Note for me: You need to park on the east end for level-er spots)
Since we went to bed earlyish, I was awake earlyish and raring to hit the road. I tried to forbear for a while so KJo could rest, but at 5:35 we were rolling. Our first stop was for a big breakfast at the Big Texan in Amarillo, Texas. We have eaten there several times, but Friday was the first time we were passing by at breakfast time. It was good. 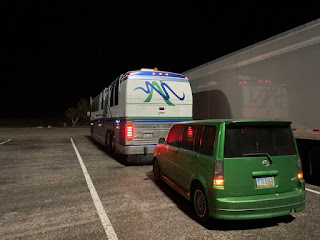 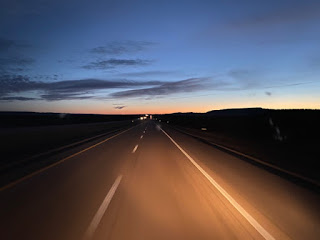 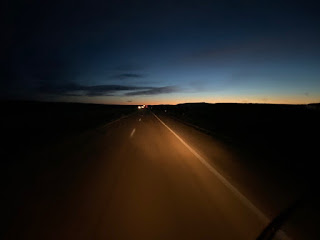 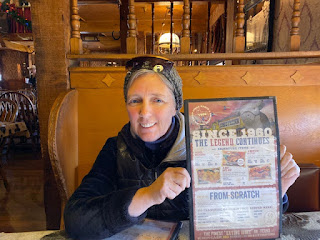 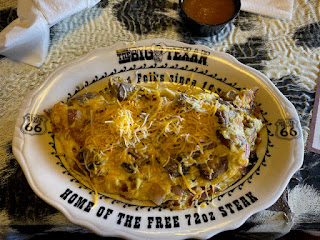 The rest of the day was good although we did have a stiff north wind for about 90 miles once we left Amarillo. We fueled up in Hinton, Oklahoma and then stopped as planned for supper in Tulsa about 4:30 with our good friend, Bro. Galen Cummins. 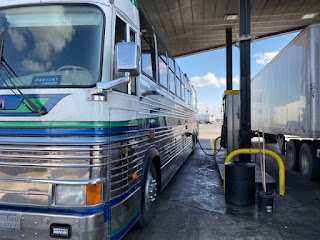 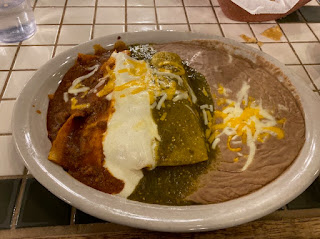 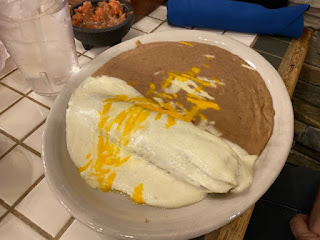 Can you believe we forgot to get a picture with Bro. Galen? Wow! I guess we do miss Odie after all. Never fear, I found a picture of Bro. Galen with his wife and mother and Odie from November 2018. 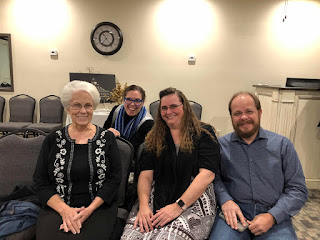 Within an hour or so after leaving Tulsa, we were pulling into Claremore, Oklahoma and making our way to the Westside Holiness Church. I told you that Bro. Millikin picked up the new tent top Thursday. He left it in his Ford Escape at the church for us.


We unhooked the Green Machine, backed it up to the Escape, transferred the tent and then hooked the car to the BoggsMobile again. We considered driving some more, but it was already more than 12 hours since we left the Santa Rosa, New Mexico rest area Friday morning. We were ready for bed. For the second morning in a row, I waited as long as I could stand and we pulled out about 6:05.


It was a beautiful day for driving, but the traffic was noticeably heavier than it had been the two previous days. Part of that is due to the area of the USA we are driving through and probably partly due to this being the weekend before Christmas.


Only two hours into our day, we made a stop to visit with Bro. Mitch and Sis. Lynn Boggs. It was super great to see them again and we hated to leave them. While we were visiting, Bro. Jason Fellers stopped at the same place to get gas so we saw him for a moment too. 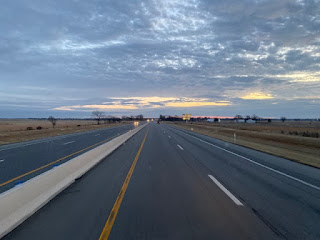 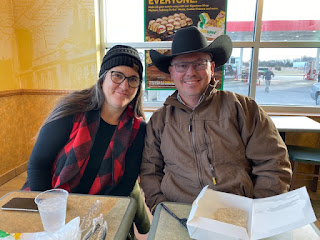 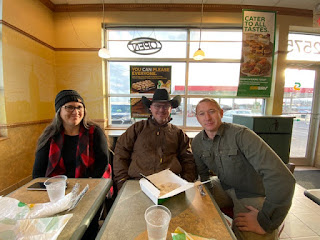 The rest of the day was uneventful like travel days are supposed to be. After 10 hours, we settled in for the evening at Flying J in Effingham, Illinois. I was a tad bit tired. In three days the BoggsMobile had carried us and pulled the Green Machine 1644 miles according to the GPS. 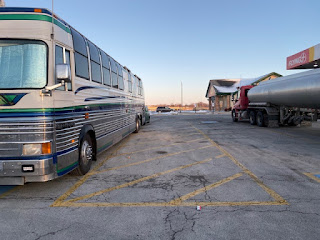 Sunday morning began too early for me. For some reason, I was wide awake at 3:00 AM. I finally eased out of bed, had my morning devotions, did some writing, completed some computer work and looked for the sunrise. Just as it was getting light outside, I started yawning. Yay! I went back to bed and slept until 9:00. Hallelujah!

By the time we cleaned up, cranked up and the bus was aired up, we were getting started later than we planned, but that was OK. We only had about 280 miles to drive and we wanted it to be as stress free as it could be. AND it was low stress all day, pulling onto the Lazy OD Ranch and into the barn sometime after 4:00 PM.

It was solid ice in front of the barn door and the front of the bus slid sideways a good bit on our first attempt. The back wheels were on gravel so backing up was not a problem. I treated the ice with icemelt and tried it again. It slipped a bit, but the bus went right in with no major problem.

The heavy rear wheels ground the icemelt into the ice real good and broke it up. 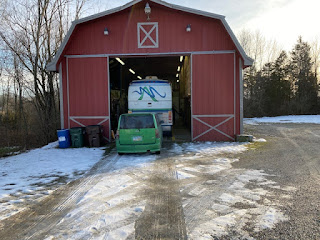 I removed the tent from the Green Machine and loaded it onto the dolly we use to haul sound equipment. The tent trailer is in Mississippi so the tent will go with us the first of the year. I will load it back up before we go. 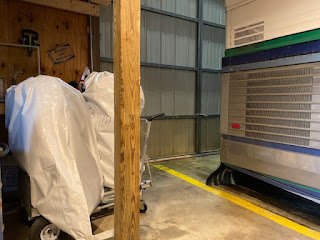 Odie was leaving for church as we were setting things up in the barn so I barely got to say hello. My Dad and Mom stopped by for a few minutes on their way to church and then we settled in, ate supper and called it a night.

That also wrapped up the weekend and a trip of 1923 miles from El Mirage to home. We praise God for protection and for the bus running great the whole way. Hallelujah!

Thank you for reading today. I know that most of you are gearing up for Christmas somewhere, may you have a merry Christmas. God bless you all.

Posted by Davy, Kelly and Odie Boggs at 5:39 AM