When I stopped at the rest area near Horse Cave, Kentucky Monday evening, my muscles were strung so tight that I thought I heard my shoulders playing dueling banjos. (Cue the rimshot, please)

When I woke up at 6:00 and went outside in Richton, I sure was glad we did all of the work the night before. It takes some time and effort to finagle all the pieces into position. Doing it Sunday night, with great help, without rain, was a whole lot better than doing it by myself Monday morning in the rain. Thank you again, brothers.

Bro. Scott had noticed that one of the trailer tires was low Sunday night. These are new tires and rims so what in the world? The guys discovered the metal valve stems were kind of lose. They tightened them, we set all the air pressure levels properly and this morning, all was right with the world of tire pressure. That could have made for a horrible day!

It was only misting rain when we prepared to leave First Assembly a few minutes after 6:00. The light rain continued while fueling in town and for the first 20 minutes or so driving north of Richton. 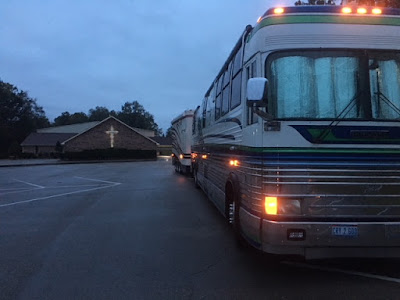 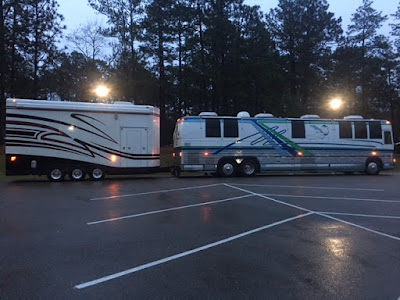 Thank you for the fuel, Bro. JW Cooper 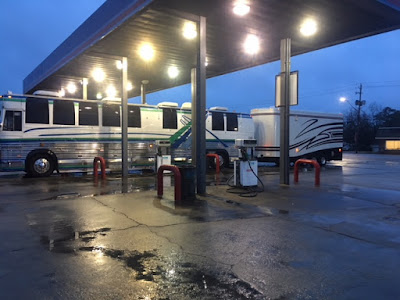 I told KJ I could handle a light misting rain like that. Then the sky opened up and the bottom fell out. Oh well, the light rain was good while it lasted.

That was pretty much the story of our whole day. Those windshield wipers slapping' out a tempo, Keepin' perfect rhythm with the song on the radio, I gotta keep rollin' (Except, the BoggsMobile wipers always seem to slap out of tempo)
Even with the hard rain, traffic in Birmingham was doable and traffic in Nashville was heavy, but not as horrible as it could be.

We arrived at Prevost Nashville a little after 2:00. I wanted to get a small part, which they did not have, and I was also picking up two of our speakers. Ben Isaacs repaired two of our nice Meyers that were damaged earlier this year and I had not had a chance to meet up with him to get them.

If I parked in front of the shop doors, I was sure to be right in the way so I pulled around to the side. By the time I carried the Meyers all the way to the trailer I was wishing I had not been so thoughtful and polite. Wow, those things are heavy after a long day.

I could have parked for the night at Prevost, but the parking was tight and I knew there would be open places at the rest area near Horse Cave, Kentucky. 86 miles later we were pulling in and had our choice of places to park. This rest area is huge!

We did get a little break in the rain for the last hour. No, it did not quit raining, but it went back to more of a misty rain.

It was 4:30 when we parked at Horse Cave. I laid down for a long winter's nap, hoping I would feel like finishing the drive to the Ranch. Three things changed my mind when I woke up from the nap.

-First, my head was as thick as my Grandpa Isaacs' molasses.
-Two, my shoulders were still playing dueling banjos.
-Three, there was a good chance of snow in the forecast for about a three hour period the coincided with when we would get home.

That was enough for me. We will be home soon enough.