This week was definitely a driving week. We drove the BoggsMobile 600 miles from the time we left Gainesville lastThursday night until we returned yesterday morning. Kelly Jo had to drive the car most of those miles with the exception of the leg between Tulsa and OKC.

We also drove the car at least a few hundred miles looking at tent sites and making other special trips along the way. The mile pretty much get bigger and longer the next few weeks but at least we do not have to pull the trailer for a while. Kelly Jo can take her proper place in the copilot seat in the front of the BoggsMobile.

As I mentioned Wednesday the Green Machine was already loaded in the trailer. It looked kind of lonely when I opened the door Wednesday morning before we left Sapulpa. 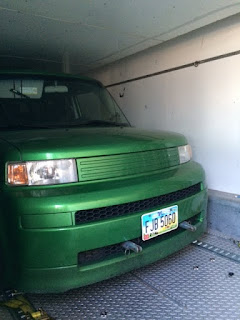 Since that task was completed all we had to do was crank the bus and then pull over and hook up the trailer. We were ready to roll about 8:30 AM. 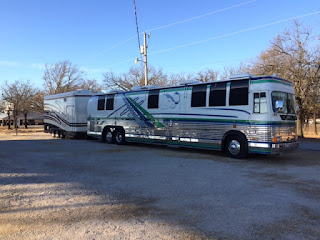 We drove to Oklahoma City and parked at Walmart on the southeast side near I-240. We unloaded the car and set out to look at a few places for City Reach OKC. 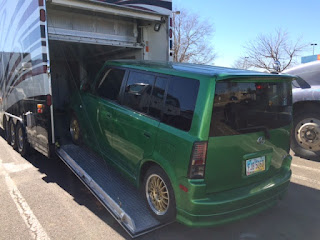 We happened to be looking at sites near our favorite Chelino's and before I knew what was happening the Green Machine turned in and parked us right at the door! 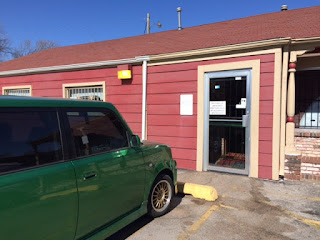 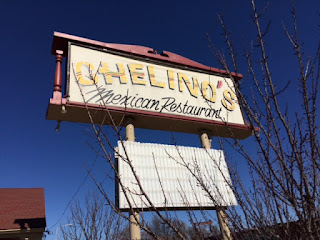 I do not care for the salsa at Chelino's but I absolutely love their food. I need to combine their food with Acapulco salsa! It was a very, very good lunch.

We jumped right into eating and forgot about pictures. I did get a picture of the tacos we ate later from a super great taco truck that Pastor Jeremy Brooks told me about at SW 44th St and S May. Wow! Outstanding! 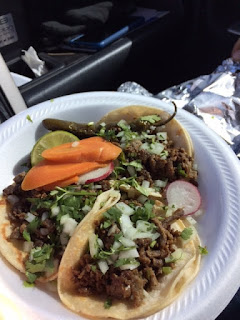 The taco truck is just 15 blocks from our number one choice of locations for City Reach OKC. The location was suggested by several folks at the Planning and Vision Service in Blanchard, Oklahoma in December and the taco truck certainly lends quite a bit of weight to that selection.

Since we never know if a location will be available until we make all of the inquiries, we looked at several other locations as well. We have a list of possibilities, with one that seems every bit as good as the number one choice. I believe that God is going to help us in OKC.

We went back to Walmart, loaded up and pointed the bus toward Blanchard. We wanted to stop for a few minutes at Bro. G.W. Birdsong's visitation at the Blanchard church. We stopped for fuel at Love's by the interstate with the intention of leaving the bus there. After we were fueled we could not get into a parking spot, so we drove on.

We ended up parking across the road from a gas station in Blanchard. There was plenty of room to park and it is obvious from the tire tracks that big trucks park there all the time. After we were situated, we exited the bus and there was a "No Parking" sign laying on the ground. We honestly had nothing to do with it being on the ground but Kelly Jo did turn it face down. It is the small white thing next to the first rock in the picture below. 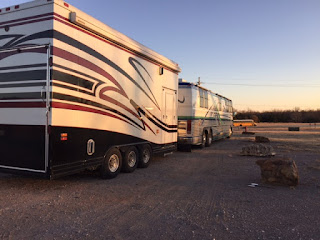 I am very glad it was possible for us to stop in Blanchard last night. Bro. G.W. was a great man and devoted his entire life to spreading the Gospel message. He evangelized right up to the last few months of his life. He and his wife have pointed thousands of souls toward Heaven and now He is is seeing it for himself.

Since we wanted to avoid being towed, we did not stay long at the visitation, Soon we were back on the road and moving toward Pauls Valley, Oklahoma. We were settled in at Walmart and KJ was doing some shopping by 9:00. Who says parking at Walmart is free? Are you kidding me? 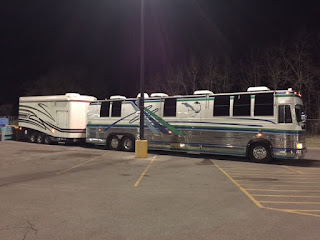 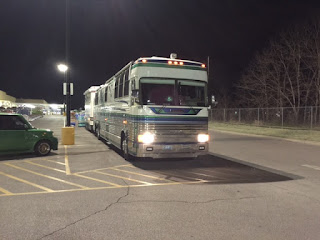 We were only 85 miles or so from Gainesville when we stopped at Pauls Valley but we needed to drop the tent trailer in Wynnewood. So we spent the night at Walmart and started early Thursday morning.

We did have a special treat Wednesday night. Bro. Bruce and Sis. Priscilla Mayhan text us after church and came by to visit a few minutes. 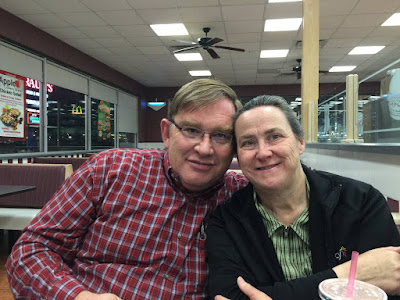 We always love being with our friends. Thank you all for taking time to come see us and for treating us to whatever we wanted at Braum's. The next one is on me!

I rolled out of bed at 5:30 and worked on transferring a few more things from the bus into the trailer. We were rolling by 6:50 and pulled into Wynnewood as the sun was coming up. It took a couple of hours or so to get the trailer taken care of but that included visiting with my dear friend, Bro. Larry Landress.

While I was messing with the trailer, Kelly Jo went on toward Gainesville in the Green Machine so she could stop at the laundromat and get that out of the way. She and Odie worked the rest of they day sorting and packing for our big trip to New York City.

I pulled in about 11:30 and worked on several things throughout the day that I might get around to telling you about later. Needless to say, we have been keeping busy and having a good time preparing for City Reach.

Today we plan to fly to New York City. We will be preaching in at least two churches and meeting with other Pastors as well. It seems that God is already opening doors for revivals but our main focus in Queens is looking at the possibility of putting together a City Reach campaign there this summer. I appreciate all of you praying about that with us.

IF all goes as planned, Odie will be checking in with you tomorrow.

Davy
Posted by Davy, Kelly and Odie Boggs at 6:35 AM