It was nice to have our niece Courtney Morgan (aka Corky Pine) with us for several weeks this summer. 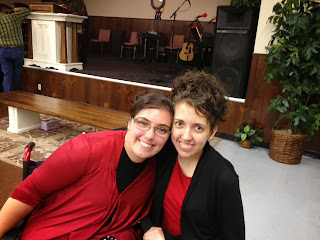 Kelly Jo has one brother and one sister. Her brother is named Danny and Courtney is Danny's oldest child. She was on summer break from college and joined us for a few weeks of fun and excitement. We hope she was blessed to be with us. We had some great revival services this summer and the Lord ministered to her in several of those services.

I know that Corky had some new experiences while she was with us. She ate lots of new kinds of food, met lots of great folks, flew in an airplane for the first time and traveled to several new states. In fact, I think every state we traveled to was new to her.

If my count is correct she traveled to 12 states for the first time. In the order of travel she went to Indiana, Illinois, Missouri, Minnesota, California, Wisconsin, South Dakota, North Dakota, Iowa, Nebraska, Kansas and Oklahoma. Several of those states she was in twice as we made our big circle this summer.

She also was blessed to experience several of the highs and lows of evangelism. She experienced all the hard work of tent revival, some very stressful travel days, many days in a row of church services, mechanical trouble, cancellations, last minute changes, very late nights coupled with very early mornings and much more. She also witnessed the presence of God in the services, the grace of God at work in people's lives, lots of fun and laughter and some great devotional times on the bus.

I think she was able to see some of the big picture of why we love the life God has called us to enjoy/endure. It is a crazy life but we love to share it.

Davy
Posted by Davy, Kelly and Odie Boggs at 3:07 PM

Email ThisBlogThis!Share to TwitterShare to FacebookShare to Pinterest
Labels: Family