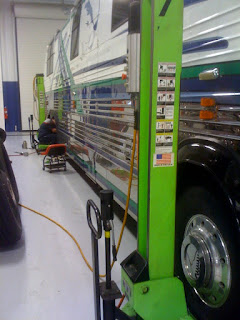 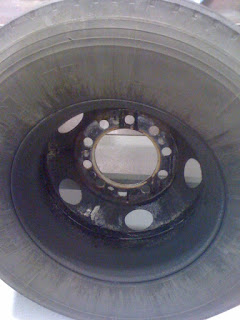 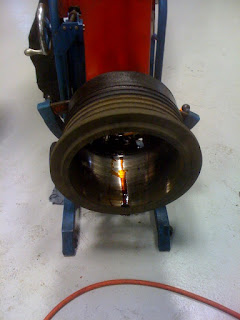 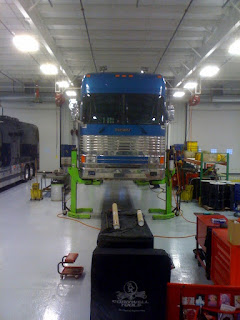 Hello from Tennessee on Thursday.

The first picture is of the BoggsMobile in the service bay at
Prevost Nashville.

The second is the backside of my inside dually tire. It shows the
evidence of a seal leaking oil pretty badly.

The third pic is the brake drum. You can see the oil on that as well.

The forth is another bus on a lift. We were lifted up in the air
looking down on the tops of the buses this morning but I didn't think
to take a picture. It was pretty cool to have 45,000 lbs. Up in the air.

We left after church Monday night and drove to Springfield, TN which
is just North of Nashville. We were at Roberts Bros. Coach in November
having some air conditioners installed and this trip they were
correcting a few things.

While at Roberts Bros. one side of the bus didn't air up properly.
It was so cold Tuesday morning that any moisture in the lines probably
froze. So everybody I asked recommended having the air dryer serviced.

We were here for a 7am appointment at Prevost and while servicing
the air dryer they spotted the leaking oil seal. That is what they are
working on now. It may not be the best way to start our first trip of
2010 but it is better than a wheel bearing catching on fire while
going down the road.

God knows what He is doing so we trust His hand.

That brings you up to date. Oh, we added some more pictures to the
website. Have a look and let us know what you think. We enjoy the
feedback.
www.davykellyandodie.com