After service Tuesday night in Everett, Mass, we visited while tearing down the sound equipment and loading it into the Green Machine. We left the church a few minutes after ten and arrived at the bus in Peabody about 10:30.

In thirty minutes we had loaded Odie in the bus, loaded the sound equipment in the bay of the bus, hooked up the Green Machine for the bus and cranked up. We were pulling out of the parking lot at 11:00 PM, right on schedule.

There are three main routes between Boston and home and each of those routes has two or three variations and options. We chose to go around the west side of Boston on the I-95 loop until we hit I-90 west. We followed 90 to I-84W to I-91S and joined back up with I-95 west along the coast of Connecticut.

I knew the first travel plaza in Connecticut would have fuel cheaper than we would see it for many miles, so we stopped in for the pleasure of adding nearly 100 gallons at $3.13 a gallon, a bargain. 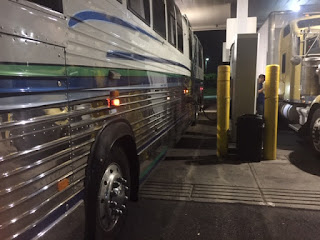 This stretch had whipped up on us the Thursday before with all the traffic, but it was wide open overnight. That was the whole purpose of driving at night. Soon we were bypassing entering NY, going around NYC on I-287 and crossing the Hudson on the new Tappan Zee Bridge. They were building this bridge the last time we were through. 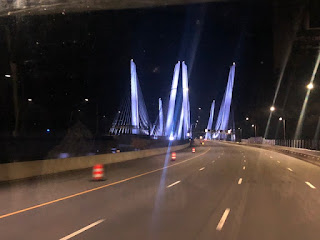 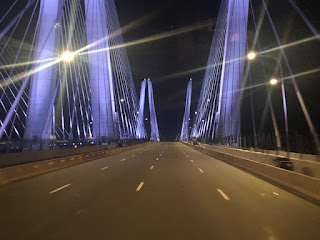 The BoggsMobile followed 287 south into New Jersey and then turned west on I-80. With most of the potential for huge city traffic behind us, we began to look for places to stop for the night. We knew our opportunities were slim along this stretch and we were prepared to drive to a rest area in Pennsylvania near Berwick.

We cruised through a few rest areas and truck parking places along the way but they were all over full. We rolled into the rest area near Berwick about 5:40 AM and the truckers were beginning to stir and hit the road. There were two spaces empty and we only needed one. Hallelujah! Praise God for 365 trouble free miles overnight.

Odie rides in her bunk so she was already in position to sleep and had probably been sleeping for hours. Kelly Jo and I did not tarry long and we were in bed a few minutes after 6:00. I did not sleep as long as I would have liked, but I had over four hours of very deep sleep. It felt heavenly. 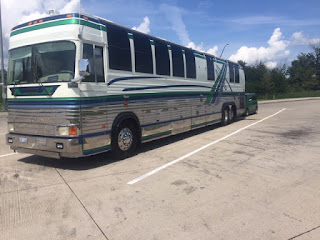 Kelly Jo prepared a big breakfast later in the day and we were on the road by 3:00 PM. We stopped for nothing but construction and bathroom breaks in the next 501 miles. We did have several one lane construction backups on I-80 though. One of them was especially slow. We traveled 25 miles in 51 minutes. Whew!

All the Ohio interstate traffic was wide open and that helped a lot on the final stretch home. The BoggsMobile was pulling into the drive at 11:05, 24 hours and five minutes after we left Peabody, Massachusettes.

That completed our circle of eight full days and 1790 miles in the bus. Out of the eight days, we were driving the bus five of them. We preached five services in two different churches, both of them in Massachusettes. The first church in Fall River for Pastor Isaac and the second in Everett for Pastor Plummer. It was a great tour.

This is our approximate route. 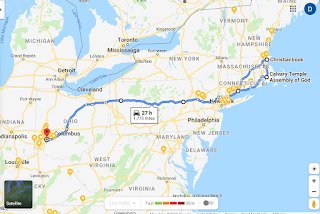 Our next revival is close to home. We begin Sunday morning and go through Wednesday night at Anchor of Hope for Pastor EJ Lamb. We will leave shortly afterward for our next tent revival in Central City, Kentucky. We are looking forward to both meetings very much.

Posted by Davy, Kelly and Odie Boggs at 5:58 AM