Tent Revival and a Couple of Projects

Colorado Springs gets two an average of 16.5 inches of rain per year. Who decided we needed most of that the last three days? Wow! The rain came after church on Wednesday but hit before and during service on Thursday.

We put up the sidewalls around the front to protect the equipment and instruments and had a great service. The crowd was less because of the rain, but there was still a super response in the altar service. Thank God we were able to have church. 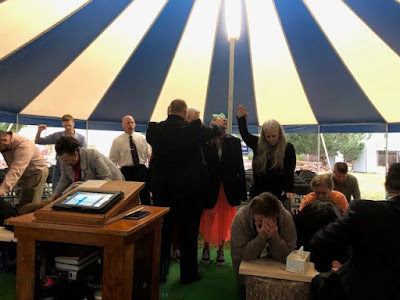 By the time service was over the rain had mostly stopped. Hopefully rain will hold off for the rest of revival. There is no sense in getting the allotment for the whole year only because I am in town.

I mentioned a week or two ago that I had a problem with the second hydraulic lift in the tent trailer. As far as I know I had never owned any kind of hydraulic lift, other than a floor jack or bottle jack, but with this trailer I own two.

I have owned this trailer for nearly 6 1/2 years and all I have done is add fluid to one of the lifts and had one weld fixed on one of the support posts. That is not too bad.

The first one operates the tongue jack on the front of the trailer. That is the one I repaired the control on in OKC. I knew the second one was acting up and I had to tackle that while in Wichita.

The second pump operates the big lift in the trailer. In the picture below the lift is up. The white surface that looks like a low ceiling is actually the bottom of the lift. The chairs, the poles, the tent bags, the stakes and a few other things ride up on the lift. 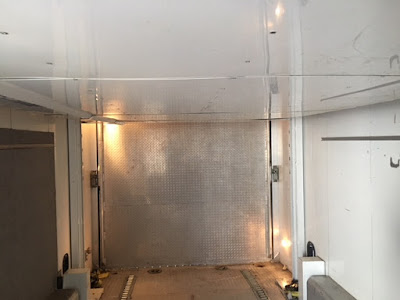 That lift first gave me a little problem when we were in Alabama. It was hesitating at times to go up. I took the cover off the pump motor and found the black wire going from the solenoid to the motor was loose at the solenoid. I tightened it as much as I could but it was almost inaccessible without removing the solenoid.

I tightened it enough to get the lift going and placed the job on my "rainy day" list.

When I raised the lift Saturday in OKC, I could smell that connection getting hot and could see it glow. I took my time and finally got it up and put the chore on my "do it Now" list.

Monday in Wichita I removed the cover and took the solenoid off. The picture below is what it looks like except the big red wire has already been removed. You may be able to tell that the black wire is against the wall and it is hard access. 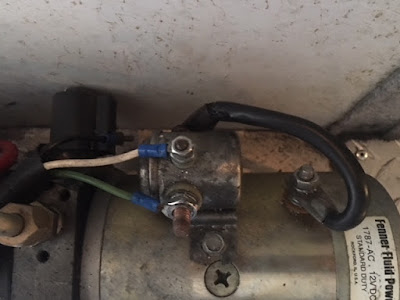 I was thinking the threaded post on the solenoid was loose and I would have to get a new solenoid. When I took it off the pump motor, I found the post still in working order. I was able to tighten it. Yay!

The end of the black wire was brittle though. It had obviously been loose (ish) a long time. It has probably been bouncing down the road in this trailer for 21 years without any attention. 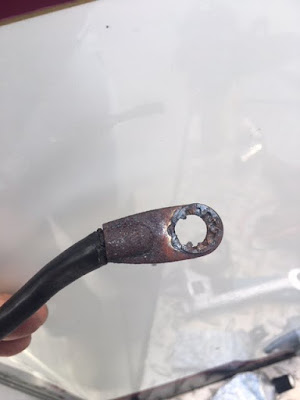 It was a 6" wire and all I could find locally was 12". I bought it, cleaned everything up real good and put it all back together. This is what it looks like now. 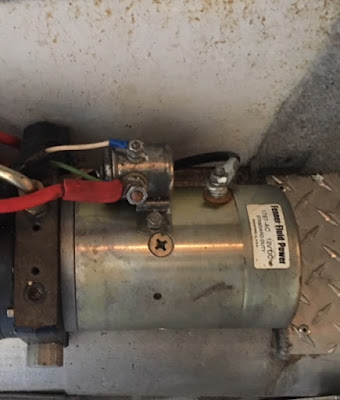 The lift works great! When we arrived in Colorado Springs the other day, the lift went up and down perfectly. I think it is operating better than it has the whole time I have owned it. Terrific.

Yesterday I tackled another project somewhat less successfully. A while back a couple of my speakers were banged up a little bit. I thought I had everything in working order except for the plug on the back of one of them. 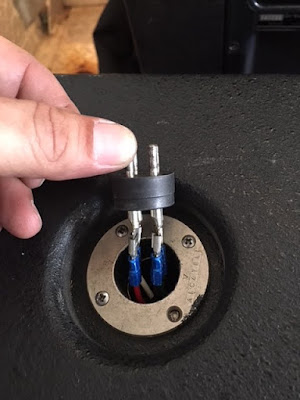 I had to order a new one and it came in last week. It had to be soldered and I know nothing about soldering. Pastor Paul Thomas did it for me in a few minutes yesterday and the connections are good.

However, both of the speakers are growling so there is obviously a deeper problem. I took them apart and checked the inside connections and all looks good. I will need to get them to an expert when I get a chance. Some things are out of my league.

We are looking forward to a great weekend of tent revival. Thanks for reading today.

Davy
Posted by Davy, Kelly and Odie Boggs at 2:02 AM