Today was a work day. I changed the batteries today and then Bro. Landress worked on replacing the leaking air hose. If you don't like posts that talk about working on things at least skip to the bottom and look at the last two pictures.. It will be worth it.
The batteries have been losing their charge quickly and they are over 5 years old so it was time for replacement. Everything went smoothly on the battery change and the bus started so I guess I didn't mess it up too badly.
There is a platform on top of the batteries and the battery charger sits on top of that. I had already removed that when I took the first picture. 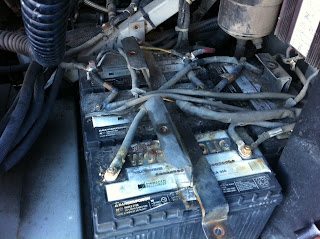 Everything is pretty much out in the open and that is always a blessing when a fat guy is trying to work on something. 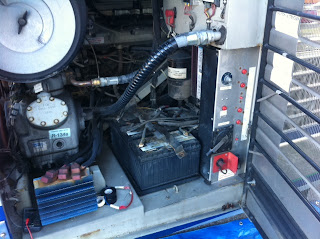 There are four batteries so I numbered the posts 1-8 and marked each wire as I took it off. Several  posts had four wires and all but one had two or more wires. By labeling each wire I wanted to make sure I didn't mix any up. Even with every wire marked clearly it could have easily been confusing. 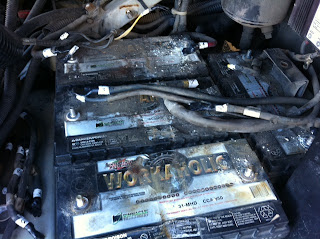 These are the new batteries below. 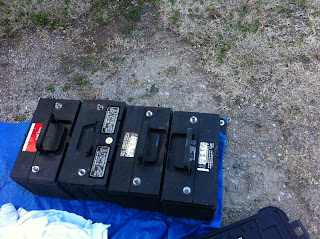 These are the old ones. The old batteries charged for about 1000 miles over the last two days and three of them read 12.1 volts when I took them out. The one in the back was at 10.8 volts so that one was the culprit. 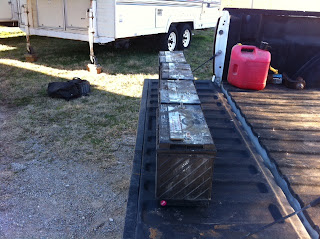 Here is the empty battery tray... 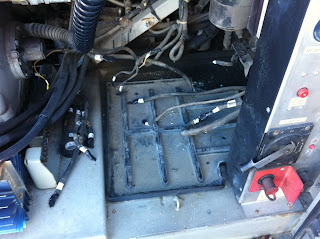 And here are the new batteries installed... 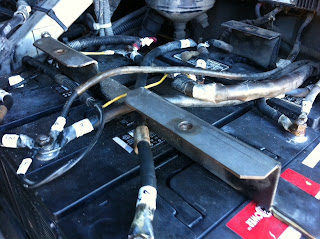 I didn't take a picture with the cover and battery charging re-installed but I should have a chance to take one tomorrow. I wish I wasn't going to open that compartment tomorrow but we are still working on the air leak. Bro. Landress took the small hose off and it had an obvious hole.
What wasn't so obvious was the fact that the large hose it was rubbing against also had a hole. This is the view from the passenger side just beyond the batteries... 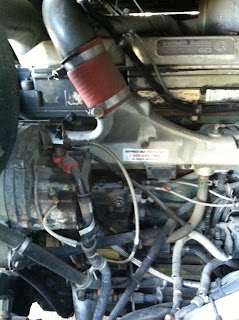 The small hose is an oil hose. It runs from a fitting next to the compressor up to the alternator. You have never heard of an alternator that needs to be oiled? Me neither, but as my Dad always said, "You learn something new every day IF you pay attention." I actually had a diesel guy tell me today that NO alternator has an oil line running to it so he would have learned something too had he been willing to pay attention. lol 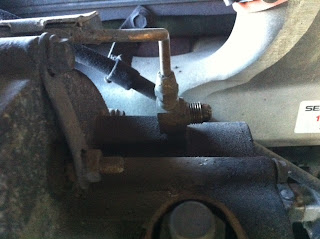 Down below near the bottom center of this picture you can see the two metal mesh type hoses. The small one going up is the oil hose the large one going side to side toward the right bottom corner is the main air hose coming out of the compressor. Of course these are special high temperature hoses with Teflon lining. We were able to have the small hose spliced with a special coupling  by a guy that specializes in hoses about 45 minutes from here. 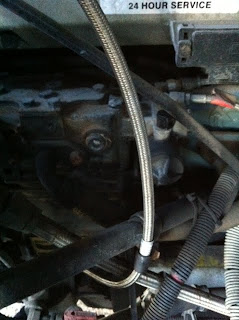 \
The large hose is a different story. It goes toward the front of the bus and out of sight. It looks like it goes all the way in front of the drive axle without a junction. That means there is no way we can access it to remove it, replace it or splice it without a lift or pit. The coupling the guy used on the small hose required a press on a bench. There may be a more portable way to press the coupling in but we have no way of knowing. The hose specialty guy isn't open again until Tuesday.
Bro. Larry is working on temporary fix so we will spend some more time on it tomorrow.
Now for a little fun. I thought you might be interested in a picture of me under the bus....
Can you believe it? 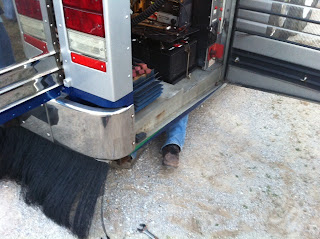 You shouldn't believe it! It was Bro. Larry and it was very tight. He had is head all the way up to the tag axle. He was trying to trace the large air hose. He just about smothered all of us while he was under there. Thankfully he made it out safe but not quite as easy as he went in. Lol 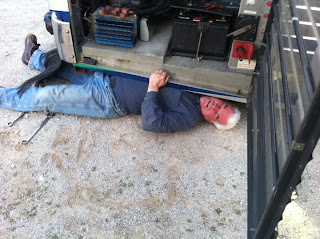 Hope you all had a great day. God bless,