There was an interesting development with the bus on Friday.
1995 Prevost XL Fuel Injector Wiring Harness
The mechanic had just removed the valve cover and he was shining his light down in amongst the valves. I was standing on the opposite side of the engine when I heard him say excitedly, "Oh No! Look at that!" Trust me, those are not the words you want to hear at that moment.
Detroit 60 Series
What was it? It was an oil-soaked shop towel tucked between valves 3 and 4. 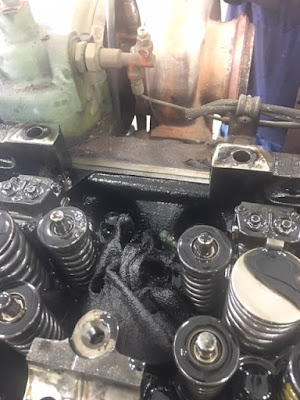 Here it is out of the engine. 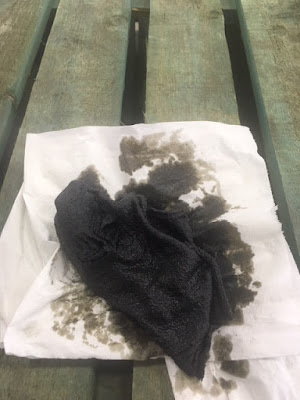 I thought some of the guys in the shop were going to have a baby heart attack when they saw it, which is pretty cool since the guy who found it and I were already having matching baby heart attacks.
Prevost Houston Mid Coast Diesel
We have owned the BoggsMobile since March 2008. I have driven it 170,000 miles. It had about 180,000 miles from two previous owners. The first owner kept meticulous records including transcribed phone conversations with Prevost and Featherlite. The second owner left behind great maintenance records as well. There is NO mention of this engine ever being opened.

I shudder to think about what could have happened during any one of those miles. If you look closely, you can see the shop towel has a few ripped places. It looks like the constant motion of the valves was leaving the mark. It could have been inching closer to a catastrophic failure. My head has been spinning since that towel was found Friday.

Makes me wish I was on social media and knew how to use it. I would put these pictures on Detroit's Twitter or Instagram. #SurgicalSpongeLeftInTheBody

In the grand scheme of things, I guess a shop towel riding inside my bus engine is a minor bump in the road, but it could only happen to me.

There is a medical term for this. Perhaps the BoggsMobile could make it into a medical journal as being the first Detroit 60 Series to have Gossypiboma or Retained Foreign Object (RFO).

Thank you for checking in.

Posted by Davy, Kelly and Odie Boggs at 1:10 AM