Algebra Is An Important Component to Owning A Bus

My brother Steve keeps me cracking up with his humor and wit. I always look forward to his take on things. Steve had a great observation when the house for Odie was finished, the dedication was over and we were preparing to hit the road, without running back home every few weeks. He said, "Now you can go back to having nothing to worry about but the bus."

Seven days after leaving the Lazy OD Ranch the BoggsMobile and Tent Trailer were parked on the side of the road and I was pouring gallons of water into the coolant system so we could finish our trip that day. Yep, back to the bus. 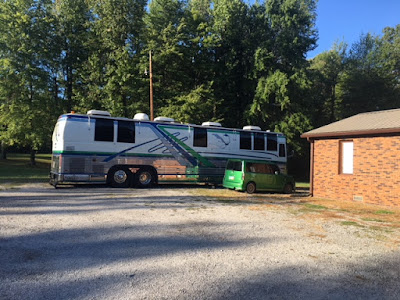 One thing we love about documenting events here is that this space serves as a great reference tool. When I need to know exactly which week we were in Central City in 2012, I google boggsblogs Central City 2012 and just like magic, the answer appears.

Three years from now when I can not remember how to check the SCA level in my coolant or recall how I managed to get the coolant/water ratio back to 50/50 I will find the information in this post.

Everything was knocked out of balance when we lost some coolant from the BoggsMobile when a 3/4" heater hose busted as we drove between London, Kentucky and Central City, Kentucky. I gave the lowdown on the saga up to that point on Tuesday the 4th.

I added a bunch of water to the mix after the leak was stopped. Last week I needed to get the coolant/water ratio close to 50/50 and also get the right amount of SCA's in the coolant for the health of the big Detroit engine. Both proved to be a little more difficult than I imagined.

There was no way I could drain all the coolant and flush and refill it at the church and it was impossible to go to Nashville or Vonore to have it done while in revival with several other things going on.

I could find no one in Central City or Madisonville that had the proper coolant test strips or any SCA additive. There were a couple of places that had the test strips, but they are time sensitive and these were way out of date, as in many years.

I called the Speedco near Franklin, Kentucky and drove a little over an hour to purchase a bottle of SCA additive and get some test strips. They do not sell strips, but I had explained on the phone and they gave me three. I tried to buy them, but they had no way to ring it up.

Next I needed to find the correct coolant formulated for the Detroit engine. I could easily find 50/50 Final Charge, but I needed full strength to get the antifreeze percentage up.

No one in town had full strength, but I finally found a few gallons at Auto Zone. Since they did not have enough, the lady called a store in the next town and they had plenty. You know the best part? It was $8 a gallon cheaper than Auto Zone.

Bumper to Bumper in Greenville had Prestone Command full strength antifreeze for my engine, pre-charged with SCA's. Perfect.

Later I found that Rural King had a different brand in stock. Rural King should have been my first stop. Where else can you by food, feed, guns, tools, live chickens, furniture and the proper antifreeze for a Detroit 60, all in one spot?

I did a little math to figure out how much full strength antifreeze I needed to add in order to get the mixture close to 50/50. I may not have needed several things I learned in school, but Algebra was absolutely necessary. Pre-Calculus has been a total waste for the 33 years since I took it in school.😉

IF I drained 5 gallons of this mix that would leave 12 gallons at 20/80 which by my calculations is about 2.5 gallons of coolant and 9.5 gallons of water. I knew I could drain about 4-5 gallons by removing the hose from one of the valves just forward of the radiator.

If I added 5 full strength gallons of the correct coolant, that would bring the mix to 7.5+ gallons of coolant and probably less than 9.5 gallons of water, a whole lot closer to 50/50 than I am now.

After idling I could then check the SCA level and add the proper amount of concentrate and be on my way.

I was able to drain a little over 4 gallons by hooking a hose to the valve that goes forward to the Aqua Hot. 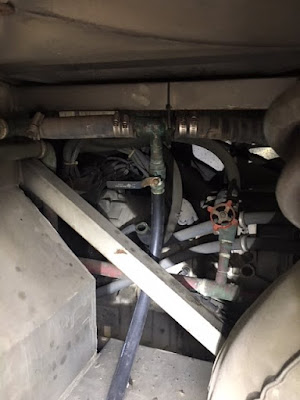 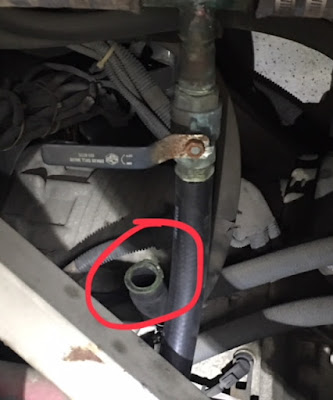 That allowed me to get a five gallon bucket under the end of the hose easily. The coolant I drained tested low, between 500 and 800 for SCA's, which was to be expected.

Coolant goes in the little door to the right of the top of the ladder. That is where the surge tank is. 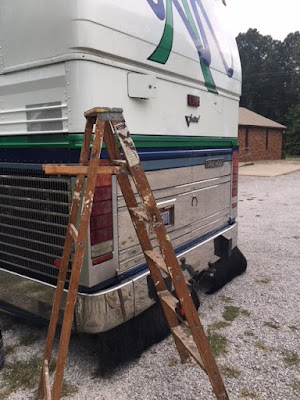 I added 5 gallons of the new coolant. 4 gallons barely raised the level to the bottom of the sight glass. We cranked it up with the bus AC blowing full strength so the engine would get warm. In 40 minutes it was up to temp and the radiator fan began to cycle onto the low setting and back off. I let it run about 10 more minutes.

After cooling down, I drew some coolant from the tank and it tested good for freeze protection and good for SCA's. The level was between 1200 and 2000. The strip said 1200 was ideal and 2000 was OK. I did not have to use the additive I purchased at Speedco since the new coolant was pre-charged with SCA's.

I would not have been surprised if I had to add more coolant while traveling this weekend, but I did not. Evidently there were no air bubbles. I love it when a plan comes together.

I drove a few hundred miles to West Plains, Missouri. Everything still looks good and no "low coolant alert" on the way here!

Until I get this flushed and filled later, I think that takes care of this episode of "Bus Psychosis."

Thank you for all of the inquiries and prayer.