What should have been an easy day yesterday turned into a rather long day with several twists and turns. We left Midway about 1:30 headed down the curvy road back toward Millry. Within the first few miles I was nearly side swiped by a flying van. I was over as far to the right as I could get but the road was very low on the edge and there was no shoulder. Whew! That was a close one.

Later I had several false readings on the tire pressure monitoring system that I installed on the trailer. Of course I did not know they were false readings so I had to keep stopping on the interstate to manually check the pressure.

The sensor with the faulty reading was on the drivers side so I had to contend with traffic. My nerves were just about shot by the time we pulled into Tuscaloosa. The company we bought the monitoring system from is sending me some new sensors.

We fueled up at the Pilot truck stop in Tuscaloosa and I parked the BoggsMobile and trailer there and drove the Green Machine to look at some RV Parks.

Pastor Larry West told me about a few different places and I had found some too. There was a pretty RV park about 3 miles from their church but there was an impassible RR track getting into it and some very low trees inside the park. It was a country setting with small lakes and lots of shade. It probably would have been  very peaceful but not if I can not get in.

We ended up about two miles from the Pilot in an annex of another RV park. It is just a gravel parking lot with hook ups which is perfect for us. Especially since it has some center spots big enough for us to pull straight in with the trailer attached to the bus. I usually unhook the trailer while we are parked but I like to have it close so we can keep an eye on it.

Pastor West said we are less than 10 miles from his church so this place will not be inconvenient at all. We are close to restaurants and stores if we need anything as well. Speaking of restaurants, the long and stressful day ended very well.

We are only about three miles from Ruby Tuesday's and their fresh salad bar and Mini-hamburgers hit the spot last night.  I rave about greasy food so much that I know that some of you are surprised to find out that I eat salad at all. But if you have enough cheese, real bacon bits, ham, greasy pasta salad and blue cheese dressing, ALMOST anything is edible!

Yes, there is lettuce underneath there! 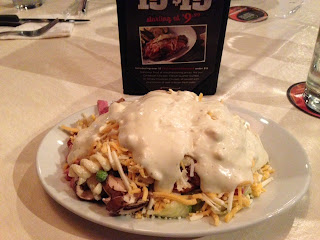 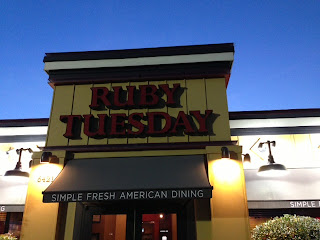 Kelly Jo has her piano out in the bus today and is practicing hard for our recording next week. She and Odie need so much practice that it is not funny!

I need the practice to but I am almost a hopeless case. Maybe everything will come together.

Posted by Davy, Kelly and Odie Boggs at 2:05 PM