When we were at Prevost Nashville a few weeks ago there was another bus that had been wrecked. I did not get an up close picture of the sides but they were beautiful before the accident. The murals on each side were gorgeous. Somebody had obviously put a lot of time, effort and money into that bus.

It was damaged on both sides like it had been side swiped or ran up against something. At first I thought it had turned over on its side but on closer inspection I do not believe it rolled over. It made me feel physically ill to look at in person and ever the pictures make my heart sink.

There was a professional driver looking at the bus while I was walking around it and I struck up a conversation. He kept shaking his head and saying, "That can happen so fast." He is exactly right and that is the reason I try to drive so carefully and prayerfully. Something bad could happen so fast. 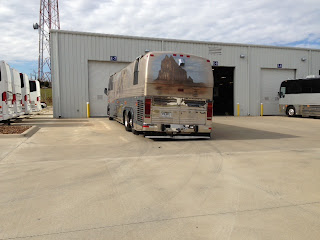 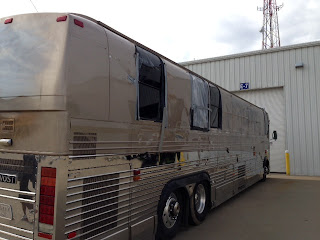 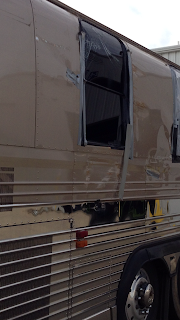 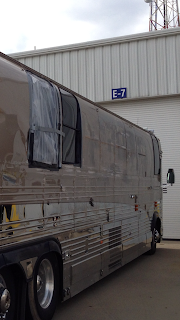 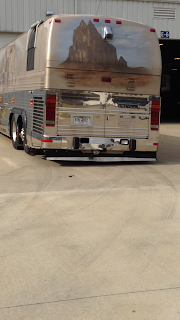 But in all my carefulness, I need more than that. I need the help of the Lord. God has certainly kept his hand on us as we have traveled across this country all of these years. We had a drunk driver scrape down the side of our last fifth wheel in 2008 but even that could have been much worse than it was. He could have hit us head on.

I have had to stand on the brakes a few times in the BoggsMobile because somebody did something crazy in front of me. I am always looking and I try to be constantly aware of what is going on around me but reacting one second late could be catastrophic.

I am very thankful that God is much more aware of what is going on than I could ever hope to be. God sees the big picture. God sees the trouble before it starts. I want to be sensitive to His voice and His leading.

I know that some of your pray for our safety every day and I want you to know how much we appreciate it. God bless you for holding our family up before God as we run up and down the roads. I know God hears your prayers.

Posted by Davy, Kelly and Odie Boggs at 5:11 AM