Cheesecake, A House Fire and the Providence of God.

I had these pictures ready to post before we went to Nigeria and some how did not get around to it before we left. After we returned from Africa we had more pictures and stories to post than we could get to and I let this one slip through the cracks. That happens occasionally and once the story gets old I usually delete it altogether. These pictures tell a story that is too good not to tell.

Does this cheesecake look good to you? Believe me it was delicious! It was so good that I ask for seconds before everybody had been served their first piece. That is a big "no no" but it was really that good. But the story behind this cheesecake is even better than the pie itself. 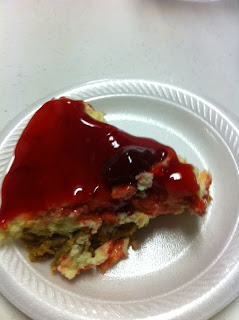 This is Herb and Samantha. They had recently started attending Desert Cove in El Mirage, Arizona when we were there in revival the week of Thanksgiving. They made the cheesecake in the picture above. 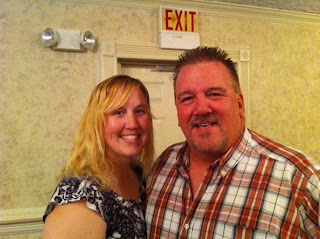 They started to leave for church on Sunday evening and at the last minute they decided to make a cheesecake for me and Pastor Noah Martinez. They were hurriedly making the cheesecake when they began to smell smoke in the house. They traced it to the utility room and when they opened the door the smoke was billowing out of the room.

Their dryer had caught fire and really burning by the time they discovered the fire. They were able to put it out without damage to anything but the dryer. I think they had some smoke damage but the fire was contained to the dryer and it was a total loss.

If it were not for the last minute decision to make that cheesecake they would have been on their way to church while their house burned to the ground. Think about that. Now, I am not saying that everybody ought to make a cheesecake for the preacher before they go to church. Although in limited quantities it might be the will of God.

But it is interesting that a last minute decision to delay leaving in order to prepare a dessert caused them to be home long enough to discover the fire and put it out. That is neat. Coincidence you say? I choose to chalk it up to the providence of God. God keeping them home just long enough to smell the smoke.

Does everybody get a chance to save their house from fire or avoid the collision at the traffic light? Does God care for some people less than others because their house does burn down while they are away from home. No, not everybody gets a chance and it does not mean that God loves one person less than the other. It does not happen every time the way it did in this situation, but it sure is neat when it does.

We could not help but tease them the next night when they brought the delicious cheesecake. It was some of the best we had ever eaten because of its secret ingredient. It was the only cheesecake we had ever had with a little bit of a smoke flavor!

We were definitely thanking God for cheesecake that night.

Davy
Posted by Davy, Kelly and Odie Boggs at 5:32 AM

Email ThisBlogThis!Share to TwitterShare to FacebookShare to Pinterest
Labels: Food, Miracles, Something to Think About