We evangelized for 2 1/2 years in the early 90s but January 2013 marks the conclusion of 10 consecutive years of evangelism for our family. We give God the glory for keeping us on the road. There are people that have been on the road for many more years but it is a Mile Marker worth mentioning in our little family.

The great people of Wichita, Kansas took a chance on me in 1999 and invited me to be their Pastor. I do not know what they were thinking but I am so glad they extended that invitation. We were there nearly 4 years and it was some of the very best years of our life.

Sunday morning January 5, 2003 was our last service as Pastor at New Horizon Holiness Church in Wichita, Kansas. We had four revivals scheduled over that whole year and we really had no idea what we were going to do. I knew the Lord had asked me to leave Wichita but beyond that I really did not have a clue.

We started that night preaching the first two nights of a revival for Mt.Vernon Holiness Church in Oklahoma City for Pastor Rickey Searcy and then began revival on Wednesday January 8th for Pastor James Fellers in Weir Kansas.

As we went to the pulpit that first night of revival in Weir, Kansas, God began to do a work in our whole family. The Holy Ghost moved so strongly that somehow we knew life on the road of evangelism was for us. With four revivals scheduled over several months and nothing to do with the rest of the time we set out to evangelize and watched in amazement as God opened doors we could not have dreamed would open.

I had committed to helping Pastor Chris Whiffen and his church in Florida for a few weeks while he was down with a surgery. We preached revivals every week until we went to Florida in March and by the time we pulled out of Haines City, Florida our schedule for 2003 was nearly full.

God fulfilled the prophecy He had given me in August of 1994 at Dryden Rd. campmeeting through Bro. John Gabbard. Bro. Gabbard told me the things I must do and then he said, "I will open doors that no man can shut and I will shut doors that no man can open." Folks, at that moment those words were absolutely humanly impossible. But God kept His word. It has been amazing to watch Him do it. I have not tried to open one door in these 10 years. I have not called one pastor and asked him if I could have a revival. God has opened every door and by God's grace we have stayed on the road working for him.

We have been blessed to see folks saved, sanctified and filled with the Holy Ghost. We have watched God transform the lives of unbelievers when they came to him. We have seen believers strengthened and renewed in their walk with Christ and churches encouraged to keep the faith. We have stood in amazement as God has healed people and made them completely whole. We give God all of the glory and honor for all of his work.

The first 15 months on the road we lived in 1984 Hitchhiker fifth wheel that we had purchased while we were pastoring in Wichita. That little trailer was a great blessing. We pulled it nearly 35,000 miles in that time period. It would not have held together much longer at that pace but it was still in great shape for somebody to use as a weekend camper. 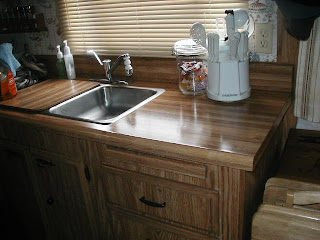 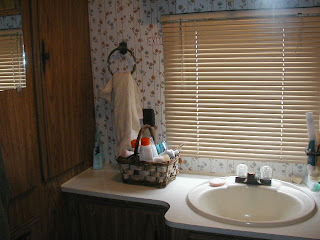 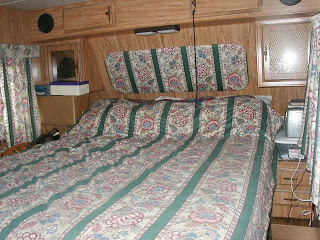 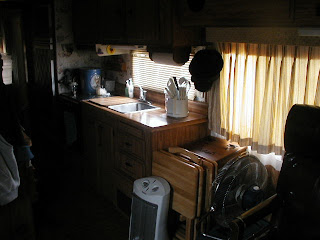 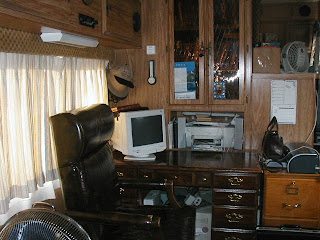 In late March of 2004 we moved into a new fifth wheel we had ordered. We ordered it special with two bedrooms and a full bathroom for Odie. Pastor Herman Woods raised the money from about 20 churches to have a lift installed on that trailer and it was such a wonderful blessing. 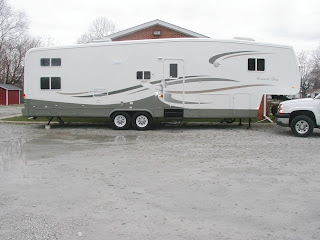 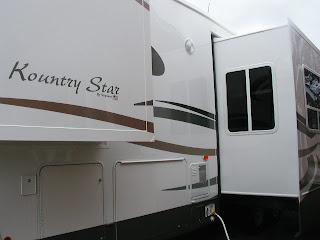 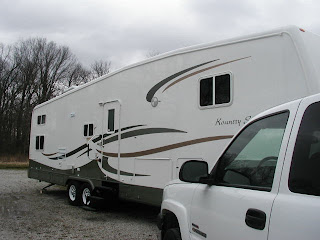 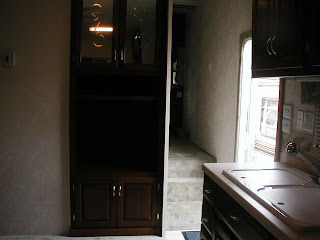 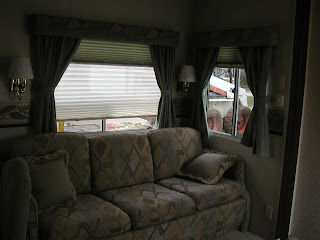 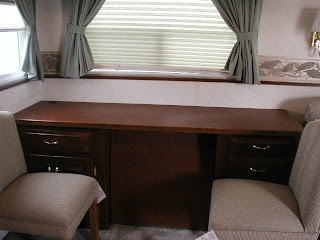 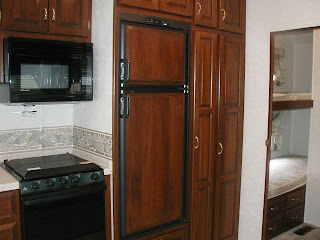 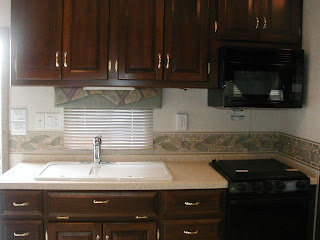 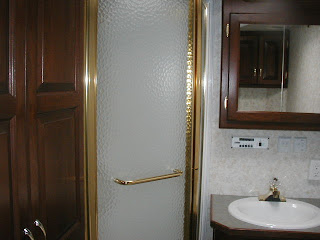 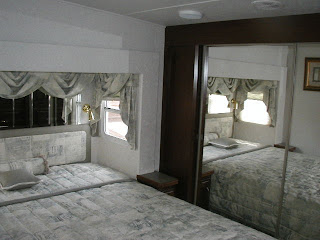 We lived and traveled in the Kountry Star for four years almost to the day. We pulled it right at 100,000 miles. It was a great trailer and the only thing we have ever owned with slides. It certainly gave us great service and was still in very good shape when we sold it.

In March of 2008 we purchased the BoggsMobile and moved in a week or so later. Bro. Kurt and Sis. Angie McCrorey had helped us move from the Hitchhiker to the Kountry Star in Weir, Kansas in 2004. In 2008 they drove to Richton, Mississippi and helped us move it all into the BoggsMobile. We could not have done it without them.

These pictures were taken the day we picked it up in Sanford, Florida.

We have changed a lot on the inside of the bus.

My parents bought the first 50 gallons of diesel for $200. It was the first time I had ever seen diesel for $4 a gallon in my life!

Can you tell I was scared to death?

Here is an interesting fact. We have lived in the BoggsMobile longer that we have anything else since we left our parents homes and married. The next longest place we have lived was the Kountry Star fifth wheel.

Our life has been one adventure after another the last 10 years. We have gone places, preached in churches and experienced God in ways we never thought possible. We have become acquainted with so many preachers and churches that have become a permanent part of our lives. I can not imagine life without many of the close friends that have become so special in our hearts since we have been on the road.

God has been so good to us these last 10 years. We thank God that He has placed us in the ministry, allowed us to work among such good people, enabled us to carry the burden for lost souls and needy churches and strategically positioned us in His church to be used by Him. There is no way I could have imagined it all. There is no way I could have planned it all. It has been the grace of God and we are so very thankful for it.

Who saw hundreds of revivals in our future? Who saw youth rallys, campmeetings, homecomings and tent revivals in our future? Who saw the souls that would be saved and the lives that would be touched. Who saw Nigeria and the doors God has opened for us there? Who would have dreamed that God would use our family to help and encourage others to the extent that He has. I could not see all that? Did you see that? There were a few men that believed in us and kept telling us we were destined to be evangelists. But even they have underestimated the grace of God working in our lives. It has all been God. I repeat it emphatically, it has all been God.

What do the next 10 years hold? I would be crazy to even guess. God has promised us enough light for the next step and I have learned to trust Him to order those steps and guide us to the proper place even though we can not see the big picture. We do not have to see the big picture since God can see it fine from where He sits. We are content to preach this revival and then move on to the next revival and then move on to the next and try to follow Christ as He leads.

We have more years of evangelism planned. We have more tent revivals planned. We would like to continue working in Nigeria. We would like to walk through open doors in Europe and other countries. There are avenues of evangelism right here in America that I have been praying about for years. I can imagine God is going to bring some of that to pass.

But God could surprise me with a totally new direction. That is God's prerogative, in fact my prayer for 2013 is, "Surprise me God." I do not expect God to change our direction in ministry but if I expected it then it would not be a surprise. God has the right to do anything He wants with Boggs Family Ministries and I expect He will.

If God allows us to continue in evangelism we do have some plans. We are shifting our strategy just a little bit. For years we have ran as long as we can and as fast as we can, singing and preaching and driving as much as we can. We have planned little breaks through the years here and there but honestly I have not been good at saying no. I have not been good at preserving our strength for the long haul. I have done well at times but not consistently.

The enormous work load of tent revivals has caused me to rethink that. In many ways 2012 was the most strenuous year of the last 10 but the effect of that was mitigated some little rest periods I had scheduled along the way. If God is going to keep us on the road then that is a change that must become permanent. That is a hard one for me because I love to preach. I love to go. I am a work in progress. I am learning. Two years of tent revivals have taught me a bunch.

I am also scheduling some revivals to start on Wednesday and run through Sunday. We will still have 6 services for revival but we will have a day to travel and a day to rest. Going Sunday through Friday and traveling on Saturday for 25 weeks or more in a row can make an old man. So we are trying this change for several weeks this year to see if it helps.

We would also like to buy a piece of property near home and build a place to park the bus with the intention of preparing a living quarters in the future. We would like to build a small place for Odie with all the accessibility that she needs. All of this would require a miracle but we leave all of that in God's hands. We are seeking His will and trusting Him to guide.

Beyond that we are determined to press on and win as many people to Christ as we can and encourage as many Christians as we can. Thank you for praying for us and we ask that you continue to pray for us.

Thanks to all of you that made this wild ride possible. I hope you are ready for a few more years of fun!

Odie has been working hard to gather pictures of the last 10 years including the ones above. I will be posting some pictures over the next week that she has found from 2003 until now. I hope you enjoy the pictures. Do not forget to leave us a comment.

Posted by Davy, Kelly and Odie Boggs at 9:20 AM