Here's one for the health nuts to figure out! You can follow the link above to the story. I've posted it below as well in case the link dies.
Davy


(CNN) -- Twinkies. Nutty bars. Powdered donuts.
For 10 weeks, Mark Haub, a professor of human nutrition at Kansas State University, ate one of these sugary cakelets every three hours, instead of meals. To add variety in his steady stream of Hostess and Little Debbie snacks, Haub munched on Doritos chips, sugary cereals and Oreos, too. 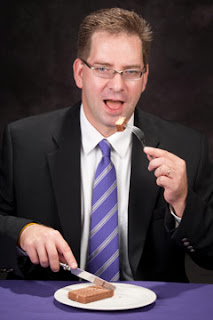 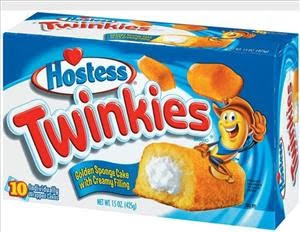 His premise: That in weight loss, pure calorie counting is what matters most -- not the nutritional value of the food.
The premise held up: On his "convenience store diet," he shed 27 pounds in two months.
For a class project, Haub limited himself to less than 1,800 calories a day. A man of Haub's pre-dieting size usually consumes about 2,600 calories daily. So he followed a basic principle of weight loss: He consumed significantly fewer calories than he burned.
His body mass index went from 28.8, considered overweight, to 24.9, which is normal. He now weighs 174 pounds.
But you might expect other indicators of health would have suffered. Not so.
Haub's "bad" cholesterol, or LDL, dropped 20 percent and his "good" cholesterol, or HDL, increased by 20 percent. He reduced the level of triglycerides, which are a form of fat, by 39 percent.
"That's where the head scratching comes," Haub said. "What does that mean? Does that mean I'm healthier? Or does it mean how we define health from a biology standpoint, that we're missing something?"
Despite his temporary success, Haub does not recommend replicating his snack-centric diet.
"I'm not geared to say this is a good thing to do," he said. "I'm stuck in the middle. I guess that's the frustrating part. I can't give a concrete answer. There's not enough information to do that."
Two-thirds of his total intake came from junk food. He also took a multivitamin pill and drank a protein shake daily. And he ate vegetables, typically a can of green beans or three to four celery stalks.
Families who live in food deserts have limited access to fresh fruits and vegetables, so they often rely on the kind of food Haub was eating.
"These foods are consumed by lots of people," he said. "It may be an issue of portion size and moderation rather than total removal. I just think it's unrealistic to expect people to totally drop these foods for vegetables and fruits. It may be healthy, but not realistic."
Haub's body fat dropped from 33.4 to 24.9 percent. This posed the question: What matters more for weight loss, the quantity or quality of calories?
His success is probably a result of caloric reduction, said Dawn Jackson Blatner, a dietitian based in Atlanta, Georgia.
"It's a great reminder for weight loss that calories count," she said. "Is that the bottom line to being healthy? That's another story."
Blatner, a spokeswoman for the American Dietetic Association, said she's not surprised to hear Haub's health markers improved even when he loaded up on processed snack cakes.
Being overweight is the central problem that leads to complications like high blood pressure, diabetes and high cholesterol, she said.
How well are you managing your diabetes?
"When you lose weight, regardless of how you're doing it -- even if it's with packaged foods, generally you will see these markers improve when weight loss has improved," she said.
Before jumping on the Ding Dong bandwagon, Blatner warned of health concerns.
"There are things we can't measure," said Blatner, questioning how the lack of fruits and vegetables could affect long-term health. "How much does that affect the risk for cancer? We can't measure how diet changes affect our health."
I was eating healthier, but I wasn't healthy. I was eating too much.
On August 25, Haub, 41, started his cake diet focusing on portion control.
"I'm eating to the point of need and pushing the plate or wrapper away," he said.
He intended the trial to last a month as a teaching tool for his class. As he lost weight, Haub continued the diet until he reached a normal body mass index.
Before his Twinkie diet, he tried to eat a healthy diet that included whole grains, dietary fiber, berries and bananas, vegetables and occasional treats like pizza.
"There seems to be a disconnect between eating healthy and being healthy," Haub said. "It may not be the same. I was eating healthier, but I wasn't healthy. I was eating too much."
He maintained the same level of moderate physical activity as before going on the diet. (Haub does not have any ties to the snack cake companies.)
To avoid setting a bad example for his kids, Haub ate vegetables in front of his family. Away from the dinner table, he usually unwrapped his meals.
Haub monitored his body composition, blood pressure, cholesterol and glucose, and updated his progress on his Facebook page, Professor Haub's diet experiment.
To curb calories, he avoided meat, whole grains and fruits. Once he started adding meat into the diet four weeks ago, his cholesterol level increased.
Haub plans to add about 300 calories to his daily intake now that he's done with the diet. But he's not ditching snack cakes altogether. Despite his weight loss, Haub feels ambivalence.
"I wish I could say the outcomes are unhealthy. I wish I could say it's healthy. I'm not confident enough in doing that. That frustrates a lot of people. One side says it's irresponsible. It is unhealthy, but the data doesn't say that."
Posted by Davy, Kelly and Odie Boggs at 11/09/2010 11:58:00 AM

Email ThisBlogThis!Share to TwitterShare to FacebookShare to Pinterest
Labels: Food, News, Something to Think About