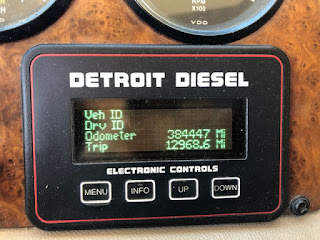 The bus shell was built in early 1995, driven from Canada to Sanford, Florida and the conversion was completed in late 1995. It will be 26 years old early next year.
A Bit of History
The bus was purpose built for a family that ordered it from southern California. In a few years, the ownership changed to a family in the panhandle of Texas. A few years later, that gentleman traded it for a newer used coach at Florida Luxury Coach in Sanford, Florida less than 1/2 mile from where it was converted.
For a variety of reasons, it sat on the lot of Florida Luxury Coach for over a year waiting on us!
The bus was advertised as having178,--- miles, but we discovered the odometer was not working correctly and soon quit altogether. When we drove away from Sanford, the actual mileage, according to the computer, was 184,479 miles.
On March 21, 2008, we completed the deal to purchase the BoggsMobile. We drove the bus away from Sanford toward Alabama and I was completely overwhelmed. We drove about 300 miles that evening and into the night. I parked in the RV parking area of a Flying J and sat in the driver's seat ALL NIGHT LONG wondering, "What in the world have I done?" "Is there anything I can do to take this thing back?"
I did not sleep a wink that first night.
Seven years and one day later, while driving north on I-65 in Alabama, the BoggsMobile turned over 100,000 miles since we owned it to 284,479.
We averaged 14,285 miles each year those first seven years which was way down from pulling our fifth wheels 35,000+ miles each year from 2003-2008.
We have had a couple of high mileage years since then including 2016 during City Reach. Those years have driven our average up, but not to extremes.
However, it took us seven years to roll the first 100,000 miles and only five years and eight and 1/2 months to roll the second 100,000 miles. As I said, we will drive past the 384,479 mark only 32 miles after leaving Colorado Springs in a couple of days.
That means our average for the second 100,000 miles was about 17,520 miles a year and 15,800 for the whole period of ownership. By the time the BoggsMobile gets to 500,000 miles it should be 32 years old and I should be in my 60s. We should be able to drive the second 500,000 miles at a more leisurely pace!😁😀😍

Our bus is not the nicest bus on the road and the clear coat shows its age badly when you get up close, but it still shines nicely with some water and a good soft brush.

In early November, it had been quite a while, way too long, since we had shined up the BoggsMobile. I have washed the bugs off of the front numerous times, I have washed the wheels and other places that were extremely caked with road grime, but the first good wash in a long time was on election day.

We had a sunny day and it was also warm enough to get wet. It seems I can not give the BoggsMobile a bath without taking one myself. KJo helped me all the way through and within one hour it was all over, but wrapping up hoses.

We use Dawn on the tires and wheels, but the rest of the bus only gets water. That is enough to make it shine like new money. 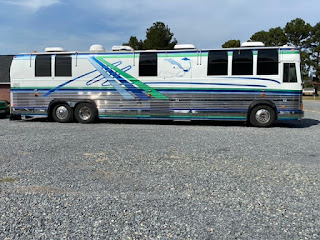 Every few years, we have a company in Nashville polish the wheels on the bus. They do it in an hour or two and it is very reasonably priced. They will also polish all the stainless on the bus, but that is much more tedious and time consuming.

I have parked next to a bus that they polished and mine looked dingy in comparison. Someday when there are no other pressing needs or wants, I am going to have that done to the BoggsMobile. 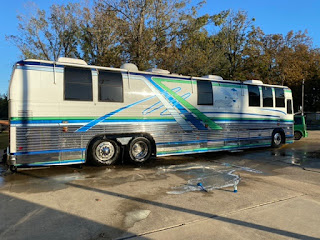 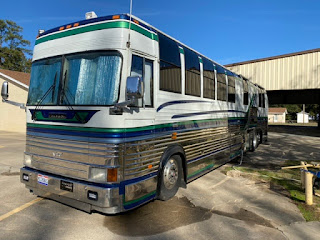 If you do not get close enough to see the clear coat peeling, it is hard to believe the BoggsMobile is almost 26 years old. 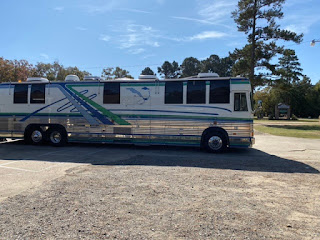 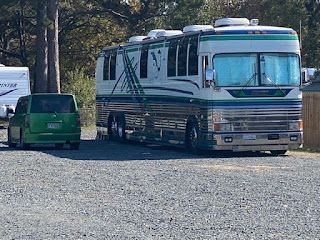 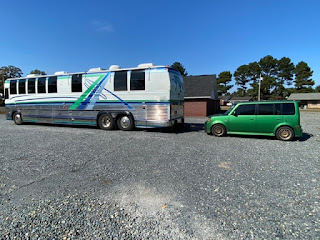 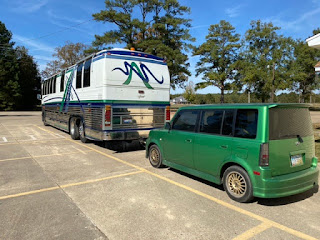 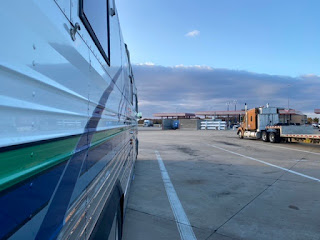 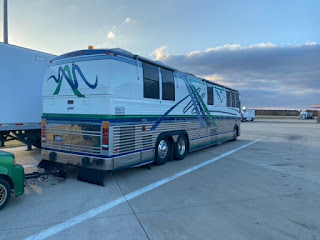 A couple of weeks after we washed it, we parked for a week in a gravel church parking lot next to a gravel road. We left in the rain and drove about two hours. This is what it looked like after that. 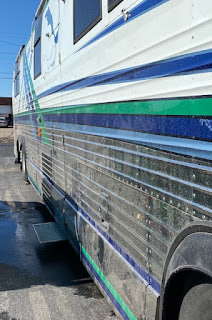 Fortunately, we had a pretty day in OKC to give the BoggsMobile another quick wash. Notice the difference? 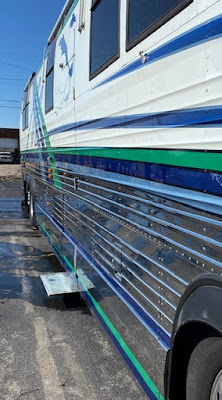 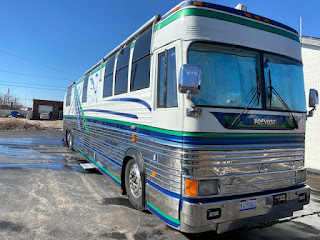 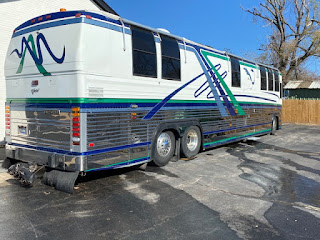 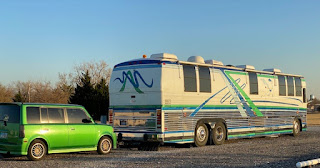 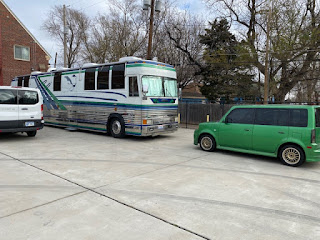 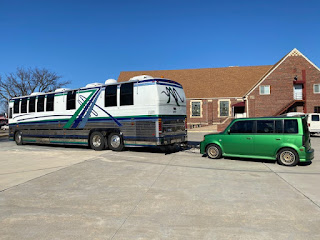 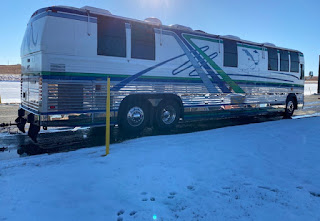 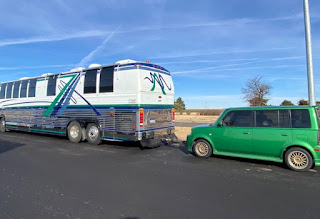 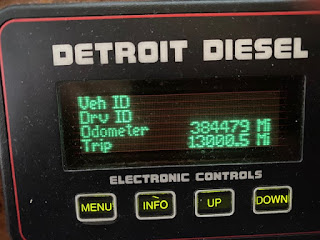 We appreciate you stopping in.
Davy
Posted by Davy, Kelly and Odie Boggs at 2:13 AM