This is interesting. We saw this in 2008 and put a picture of it on our website then. Walking around the cemetery in Zoar, Alabama Wednesday we found the marker again and took these pictures. 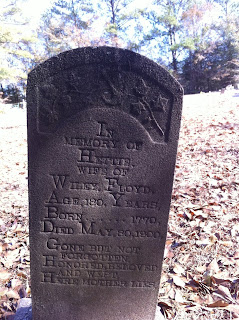 Here it is a little closer. 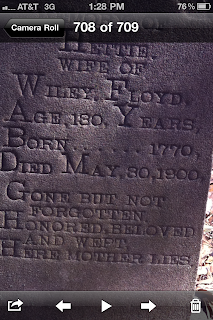 Isn't that amazing? I guess it could be a hoax but if it is then it is an old one because the headstone looks just like all the other ones around 1900.

If the dates are accurate...
-She was born a British subject (France had given Alabama to England 7 years before she was born)
-She was 6 years old when the Declaration of Independence was written and died when the USA was 124 years old..
-She was 19 when George Washington became our 1st president..
-42 during the War of 1812..
-49 when Alabama became a state. (For most of her early life Alabama was passed back and forth between England and Spain)
-91 when the Civil War started..
-95 when Abraham Lincoln was assassinated..
-She was 39 when Lincoln was born and lived 35 years after he died..
-She lived to see 25 presidents, she died in the last year of William McKinley's term.
-Franklin Delano Roosevelt the 32nd president was 18 years old when she died... Dwight Eisenhower the 34th president was 10 when she died. Ronald Reagan the 40th president (He left office just 22 years ago) was born just 11 years after her death.
-If she had a child at 20ish and each succeeding generation had children at 20ish she would have easily known her great great great great grandchildren.
-The average life expectancy in the American colonies is estimated to have been between 25-45 years old. Infant mortality is thought to have been between 30-40%. If she was born in the wiles of Alabama the statistics were probably worse. Hattie lived to be 130 against terrible odds.

She must have been quite a woman. Wouldn't it be cool to know her story. We know she was married and had children. But how many children? Were any of her children alive when she died? How long was she a widow? Did she live in Alabama her whole life? How did she finally die? Did she live all those years and die from a cold or spider bite? Was she a Christian?

I guess I'll never know but her life reminds me that no matter how long we live we still have an appointment to keep. It is appointed unto man to die and after this the judgement. I would have to live until 2097 to match Hettie Floyd. Do I have 87 more years to live? Problably not. Do I want 87 more years here? Nope! But I must be prepared for that divine appointment whenever it comes. Whether we get 20 or 130 years we must not neglect to prepare to meet God.

You can find more information about salvation here or send me a message and we can talk. In spite of Hattie's long life we all know you don't have to be old to die. Now is the time to repent and prepare to meet God.

Davy
Posted by Davy, Kelly and Odie Boggs at 8:28 AM