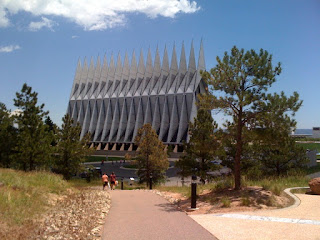 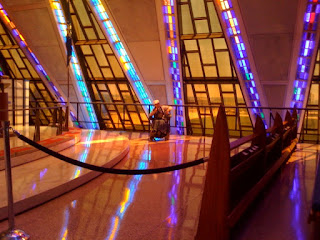 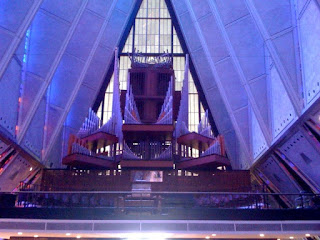 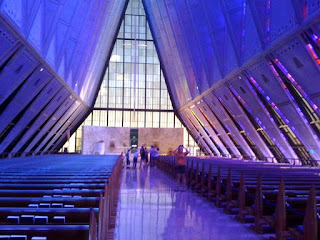 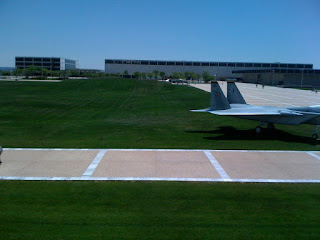 We went to the Air Force Academy Wednesday and it was awesome! It is at the North end of Colorado Springs and nestled right up against the mountains. It is absolutely beautiful up there. Back in the late 1950s the government purchased the first 10,000 acres for the Academy for $100 and acre. I would like to have 10 or 20 acres of the land myself. I think I would be willing to double their money! lol

The visitors center is very nice and informative. The folks there suggested we walk to the chapel and the cadet grounds which we did. It was only 1/3 mile but it was literally uphill both ways and with the altitude over 6000 ft. it was quite a walk for this fat boy. Kelly Jo has been walking at least 2 miles a day and she was pretty winded as well so I didn't feel so bad. Odie was in her power chair and the hills and thin air didn't seem to bother her at all.

The first picture is one of the cadet grounds and the rest are of the inside of the chapel and one of the outside. The third picture is of the massive pipe organ in the back of the chapel. It is a pretty impressive structure. In fact the whole Academy is pretty impressive. They certainly put the cadets through their paces in four years and I would say every graduate deserves the degree and their place as officers in the Air Force. Thank God for folks that are willing to serve our nation in that capacity.

We were able to see some of the cadets flying gliders which is part of their training and that was a sight to behold as well. Too bad they were to far away to capture pictures with my iPhone.

Today we are off to Durango, Colorado... I'm sure we will have some pictures and stories...