In my never ending search for the Best Greasy Cheeseburger in the world I recently came upon a place called Fatburger! What's in a name you ask? Well, in this case, everything! That name was just too good to pass up. 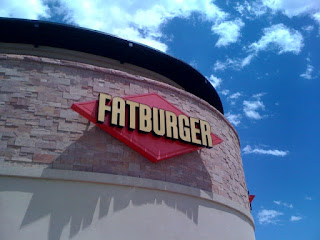 We went in and I ordered the largest Hamburger they had. It was supposed to be three 1/2 pound patties and it looked like it lived up to its description.. 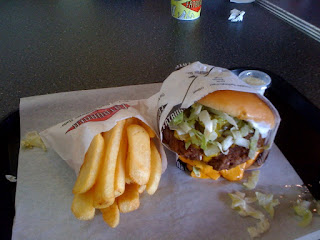 This picture is even better! 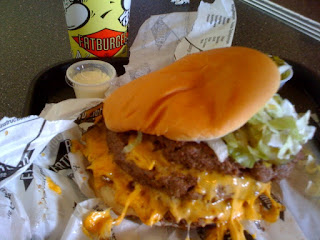 It was a bit pricey especially since they charged extra for almost everything. I ask if the burger came with cheese and the man said cheese was .79 cents extra. I ordered it with cheese and they charged me .79 cents per slice. That means on a triple hamburger with 4 slices of cheese the cheese alone cost $3.16! See what I mean about pricey and charging for everything?

The sandwich was delicious though! The patties were very thick as you can see in the picture and they were very good. Not as greasy as I like it but I understand most folks want all the grease squeezed out. I have developed a liking for very thin patties the last couple of years like Steak N Shake, Spanky's in Broken Arrow, OK and Ron's in Tusla and Oklahoma City. These patties at Fatburger are definitley not thin, hence the name Fatburger, but they are definitely good!

The guy at the counter tried to talk me into a smaller version of their hamburger. He was sure the giant triple would be too much for me to eat. I was a little offended by that. After the meal he ask me what I thought and I told him, "It was a pretty good little snack." I think he was offended my that! Bless his heart!

I noticed on their website that they have been around since 1952 and are located in several states so they must be doing something right. The price will probably keep my visits to a minimum though. Not that I mind spending good money for good food but there was a Five Guys right across the street. I couldn't help but think about the fact that I could have had two loaded Double Cheeseburgers from Five Guys for the same price and had money left over. That will win me over every time!

I am sure you will like it if you love a good hamburger. They had burgers that were quite a bit cheaper than the one I ordered. If you find one and try it, let me know what you think...

Davy
Posted by Davy, Kelly and Odie Boggs at 1:00 PM