The tent came down early in Virginia this week. 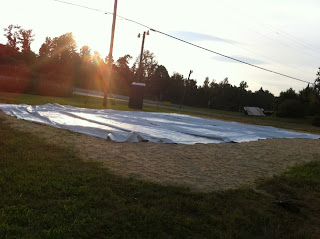 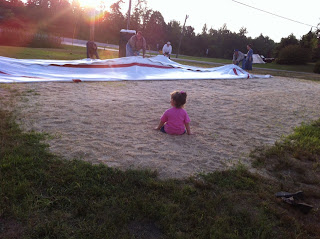 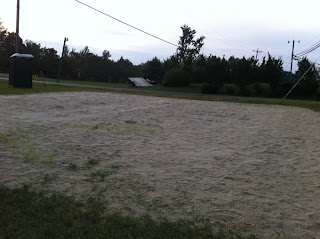 Revival was scheduled to run through Friday but we took the tent down on Tuesday night. The officials in Greene County Virginia shut down the revival. We thought all our bases were covered but they served notice on the property owner Monday that the revival had to cease. Bro. Eddie Deane and I met with two of the county officials on Monday evening and scheduled an appointment to meet with the county administrator and his assistant on Tuesday morning.
Although the meeting was cordial we could gain no ground at all. The zoning for the property we were using allows for a tent to be erected for several types of uses. We could set up a tent for a family reunion, a wedding, an elks club meeting or any assortment of puroses, but not for a religious meeting.  In order to have religious meeting on that particular piece of property it takes a three month approval process and a $500 permit.
To allow a tent for almost any reason other than a revival is blatantly religious discrimination in my opinion. I expressed this repeatedly to the county administrator, Barry Clark and his assistant Bart Svoboda but they refused to allow us to continue revival. I was willing to leave the tent up and carry on with revival but the property owner would have been the person in jeopardy. He was kind enough to provide the property, electricity and sawdust, I thought it was only right to take the tent down and save him the hassle of going to court.
I believe our rights were infringed upon by the officials of Greene County. The First Amendment to the Constitution states:
Congress shall make no law respecting an establishment of religion, or prohibiting the free exercise thereof; or abridging the freedom of speech, or of the press; or the right of the people peaceably to assemble, and to petition the Government for a redress of grievances.
(Starting with Gitlow v. New York, 268 U.S. 652 (1925), the Supreme Court has held that the Due Process Clause of the Fourteenth Amendment applies the First Amendment to each state, including any local government.)
We were violated in three areas that I can see.
1. In prohibiting the free exercise of our religion
2. In abridging our freedom of speech
3. In preventing us from peaceably assembling
I was very disappointed to have such a promising revival end after only two nights.
I was very disappointed to see so much excitement in the community about God and His Word only to have that enthusiasm crushed by a few individuals.
I was disappointed that Bro. Eddie Deane, Sis. Tina Deane, Pastor Buzzy Deane and his church worked so hard and gave so much only to have revival end so quickly.
I was very disappointed that the officials of Greene County did not appreciate or support our efforts and more importantly the efforts of their own citizens to improve the moral climate of their county.
I was very disappointed that one official stood behind religion itself to assure us this was not religious discrimination. This could not be religious discrimination, he said, since he had a Bible study in his house the night before. (This may or may not be a violation of the same ordinance we were violating since he was holding a religious gathering in a residential zone.) This reminds me of the people who say they are not racist or homophobic and then prove it by telling you how they once hugged a Mexican or black man or shook hands with a homosexual. It rings very hollow. I am not even suggesting that he was being dishonest in his statement but in my opinion he was intellectually dishonest by studying the Bible and shutting down the preaching of that same Bible.
The fact is no matter what the reason, the tent revival was shut down.  There are folks in Greene County who will not hear the gospel this week.  People who may have been saved from sin, healed from disease or delivered from addiction will not hear the message of what God can do in their lives because these men shut the meeting down. Yes, there are churches these needy people can attend but we were trying to reach for those who don't or won't go to church.
You are welcome to write a polite and civil email to Barry Clark and Bart Svoboda and express your disappointment as well. I am sure they would appreciate your feedback. If you can not be polite, civil and most importantly Christlike then please do not write them on my behalf. Their addresses are below. I obtained the email addresses from the Greene County website so I assume they are correct. If anyone has better addresses leave them in the comments below.
Also, if you are a resident of Greene County you might want to contact the County Supervisors and let them know your feelings as well.  Please note, the County Supervisors had nothing to do with this decision as far as we know but they are elected by the voters and they are ultimately responsible for hiring the county employees. I am sure they are interested in the voters opinions of the actions of those employees. You can find information on the Greene County Supervisors HERE.
God knows we did our best. I know I will never regret in eternity that I set that tent up in Greene County.
Thanks for reading. If you have any questions please contact me. If you have any comments or encouragement please leave a comment below. You are welcome to forward the link of this post to everybody you know.
God bless,
Davy Boggs
Boggs Family Ministries
Email for Barry Clark, County Administrator
bclark@gcva.us
Email for Bart Svoboda
bsvoboda@gcva.us 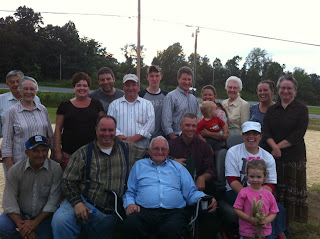 Our help in taking down the tent. 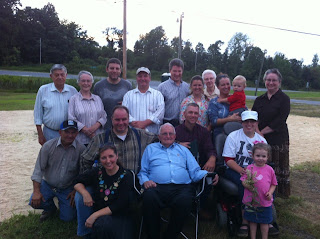 Posted by Davy, Kelly and Odie Boggs at 2:01 AM

Email ThisBlogThis!Share to TwitterShare to FacebookShare to Pinterest
Labels: Something to Think About, Tent Revival