This week is sound equipment project time. It is nothing major just small irritating things that must be taken care of at some point.


It started the last night of City Reach Wichita. Just before service started we smelled something getting hot. I quickly zeroed in on the plug strip that we plug into the extension cord from the generator and then plug a bunch of our sound equipment into it. It definitely smelled hot. While Bro. Jimmie Radcliffe was checking the voltage output of the generator, Kelly Jo was fetching another plug strip from inside the BoggsMobile.

When all was said and done the generator was producing the proper amount of voltage and the old plug strip was finished! It was only a 15 amp household plug strip and at first I thought we had overloaded it. I have since determined that the amp load was within limits but we have been using the plug strip for years. It is possible we have overloaded it in the past or perhaps it had served its time and was ready to go the way of all old plug strips.

I thought that was the end of it until we set up the first night under the tent in Richton. That's when I discovered that neither of our Shure ear monitor transmitters had any power. When I arrived at Tanner Williams I had a few minutes to tear into that and discovered that both of them had blown a fuse at the power supply. That means the plug strip must have caused a spike or something while it was going out.

Thankfully nothing else seemed to be damaged. The fuses are very, very cheap, 5 for $2 but no one carries them locally. I could not get Amazon Prime shipping on them so I had them sent to next weeks location.

I was concerned however because I have a Furman power conditioner that is supposed to prevent any electrical damage to things plugged into it. The Shure transmitters were plugged into the Furman and the Furman was plugged into the plug strip. Did it allow the Shures to be damaged and save the rest? The Furman is 11 years old and has been in use at least 3000 nights so maybe it is nearing the end of its life too. 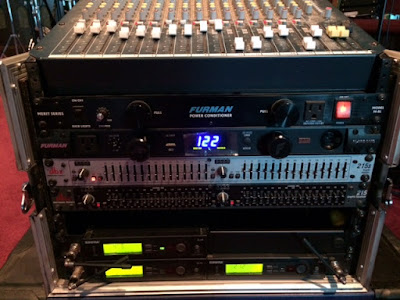 Notice the "122"? That is the voltage being supplied. That will be handy information to know and it also will tell me how many amps are running through it which will also be very handy.

I received the new power conditioner yesterday but when I went to install it I discovered it had a 20 amp plug that is made to prevent it from being plugged into a normal 15 amp house plug. The neutral blade is turned 90 degrees. 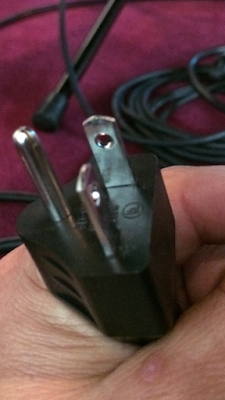 I understand the reasoning behind it but it sure ruined my day. I found adapters online but NOBODY had them locally. No fuses and no adapters. Do you miss Radio Shack? 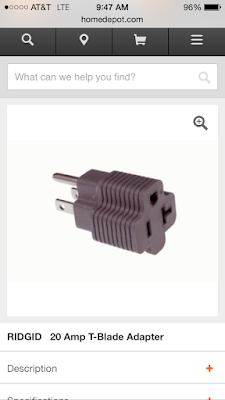 I could not get one shipped here this week without extreme shipping costs so I went to Lowe's and made my own. 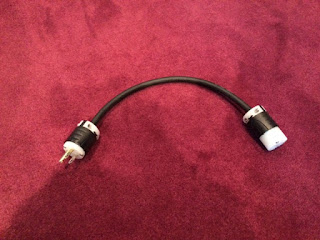 You can order one similar to the one I made and they are $22. I made mine for slightly more than that but I have it right now. I will order one like the gray one above and keep it as a spare.

So that puts us back in business for a while!

Davy
Posted by Davy, Kelly and Odie Boggs at 3:10 PM No comments: